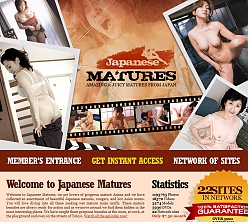 Overview:
What words and images come to mind when you think of older Japanese women? If you're thinking tea ceremonies and traditional dress, you're aiming too old; think a little younger, around 45-to-60. Are you now thinking of sultry mature beauties applying their ample sexual experience to new adventures and explorations? No, well perhaps after a visit to Japanese Matures you will. Making its network home at All Japanese Pass, Japanese Matures focuses its attention not on the colorful costumes of JCosplay nor the heavy-chested hotties of Big Tits Tokyo nor the freaky exhibitionism of Public Sex Japan but on women usually considered past their prime. The only women you'll find blowing and fucking and enjoying each others' snatches are all over 35, perhaps even over 40, and represent an older generation of Japanese than what you usually see in JAV porn. Make no mistake, though, these women aren't slowing down in their advancing years. If anything, they're only getting wilder and more adventurous, brazenly fucking in public, taking creampies from all comers, allowing themselves to be fondled and fingered on crowded trains, and even dragging teenage boys into public restrooms for impromptu trysts. Charging $29.95-a-month for standard access but including in that package access to the entirety of All Japanese Pass, Japanese Matures seems a pretty good bet if you're after hardcore sex with 30-something, 40-something, 50-something, 60-something beauties who, true to Asian stereotypes, are as irresistible today as they were twenty-five years ago.

Pros:
Many gorgeous Japanese cougars, MILFs, and mature hotties have assembled here to convince you of their sexual worth: Aoi Aoyama, Ayumi Takanashi, Hisae Yabe, and Momo Ogura are among them. Although not granted profile pages, most models are correctly identified by Japanese Matures' webmasters and their other online work can be easily found.

Although they fall short of true High Definition standards, Japanese Matures' videos often deliver strong images in their 404p frames whether streamed or downloaded. New scenes are added to the already large archive once-a-day on a very busy schedule that's no doubt the envy of many competitors.

Holding a huge 1,102-scene archive at present but still updating as frequently as ever, Japanese Matures has plenty to offer the discerning MILF-loving Asian-fanatic. What's more, access to the entire 24-site All Japanese Pass network is included in all membership packages, which, by the way, can now be had for a measly $19.95-per-month!

Cons:
Lacking the High Definition videos found on a few other All Japanese Pass websites, Japanese Matures and its viewers are stuck with 720x404 pixels as the maximum available video resolution. Hopefully an HD upgrade with 720p or better yet 1080p videos isn't too far off. A lack of WMV files will likely frustrate Windows users while Mac users will enjoy the MP4s.

It appears middle-aged Japanese women love to talk. So much so, in fact, that I'd wager Japanese Matures contains more dialog-laden scenes than any other All Japanese Pass website. Unfortunately, these scenes have been left untranslated in their original Japanese and, as such, are bound to leave English-speakers confused.

Sometimes variety is a curse, not a blessing, and at Japanese Mature it's starting to lean that way. Scenes range in duration from five minutes to well over an hour and some feature so little sexual activity you'll wonder why they weren't cut-up and only the best and nastiest bits put online. Some scenes are simply too out-there for most viewers and won't be much more than a curiosity.

Conclusion:
Taking a slightly more sedate approach to J-porn than its network counterparts, Japanese Matures showcases the beautiful and remarkably youthful middle-aged and soon-to-be-elderly women of Japan in hardcore style. Unfortunately censored by national busybodies, Japanese Matures rarely gives you an unblemished view of all the juicy, explicit action happening behind the pixel clouds. This major disappointment (and a few minor ones) aside, there's lots to love about this site. From the impressive sexual variety to a bevy of charming mature models to the daily-updated 1,000-scene archive, this is a MILF-focused JAV site that delivers in most every department. If only HD videos were on the horizon, uncensored ones, preferably, there'd be no reason at all to deny Japanese Matures your concentrated affection… or your money. Until then, be prepared for some minor letdowns on your path to MILFtastic sexual fulfillment.