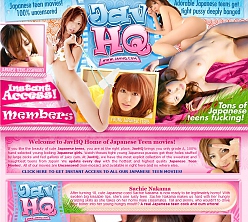 Overview:
In Japan, pornography is so commonplace that it's not really even called pornography. Instead branded with the term "JAV" meaning "Japanese Adult Video," Japan's uniquely weird and wonderful smut can be found in all kinds of everyday retail establishments and from specialized vendors. The problem with most publicly accessible JAV, however, is censorship: pixel clouds obscure genitals and can be hard to accept or ignore. JAV HQ's title suggests its a notable headquarters of JAV distribution and, from even the quickest glance at the site's tour pages, this seems to be true. On its tour pages sit sexy Japanese "teens" exposing their slim yet curvy bodies, sweet faces and personalities, along with their unbridled enthusiasm for physical pleasures. Spreading their mouths and cunts (and sometimes asses) open for their modestly-cocked co-stars, JAV HQ renders the models' genitals as clear as daylight. That's right, folks, this site promises 100% uncensored Japanese hardcore fucking for only $29.95-a-month - an affordable rate, if not a bargain-priced one. If JAV HQ manages to provide its customers with HD video formats to best capture the bevy of delightful Japanese sluts featured in its archives, and if there are no major update interruptions or absent scenes, JAV HQ could very well become your only required JAV destination.

Any site calling itself an "HQ" of any kind should host a substantial archive before opening its mouth. JAV HQ, thankfully, has plenty to offer: daily updates add new scenes throughout the week and keep the collection growing past its current 1200-scene state. Updates appear consistent and reliable.

Anyone interested in JAV HQ will likely be interested in My Cute Asian, Teen Thais, AVIdolz, Brutal Asia, Asians Bondage, and Japan HDV. Access too all six sites is provided to paying JAV HQ members. As part of this network, JAV HQ also serves as a great bonus for those joining ranks of others sites' members.

Cons:
JAV HQ might host movies not found anywhere else online (though it's rare) but they will be found in physical form (DVDs, Blu-Rays etc). Simply finding uncensored JAV can be quite tough, so it's not like JAV HQ isn't serving a worthwhile purpose, it's just not generating original smut of any kind.

Hitting the Search page and selecting "Video HD" you'll be presented with every single High Definition video JAV HQ hosts. What a pity there's only eight of them! All interracial scenes seemingly made by the same studio, these eight HD scenes could really use some company.

Compared to the video archive teeming with more than 1200 scenes, the photo archive seems pretty fucking weak. Holding a mere 89 galleries, each one containing around 30 images and, whether viewed online or downloaded in zipped sets, only make it to 800px. Many galleries are, like some older videos, showing their age.

Conclusion:
Although JAV HQ might be struggling to throw enough 1080p HD videos online to meet today's demanding viewing standards, what is hosted here proves to be extremely racy, covering many niches and sub-genres within JAV, this site and its large archive has ample to offer. Starring many well-known JAV idols as well as a bevy of former models from an earlier era, there's plenty of foxy females to choose from. Although videos, as stated, need some improvement, viewing is generally a trouble-free affair with streams and downloads provided with all scenes. Available in digital and physical formats elsewhere, much of JAV HQ is nonexclusive but very well packaged on this particular site. With added network access boosting the value of a monthly membership, JAV HQ remains far from perfect but is nonetheless an extremely fun all-Asian affair.