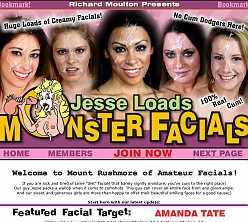 Pros:
An exclusive collection of POV scenes focusing on flirtatious oral sex and straight-up missionary and doggy fucking, Jesse Loads Monster Facials sees every scene end with a spoogey blast of man milk aimed squarely at the face of the tired-jawed girl.

With an existing archive of 182 scenes online and waiting to be viewed, there's a good amount of depth to Jesse Loads. Topping it off, though, is a bonus collection of around 100 behind-the-scenes videos running between 20 and 50 minutes and offering some great insights into the performers and their working process.

Cons:
Jesse Loads' videos can be streamed, but only in WMV format. This will surely cause problems for many Mac users, who'll be forced to install third-party software just to see unsteady, jumpy streams. Flash or MP4 streams would provide greater compatibility across more platforms.

The style of lighting and photography is rarely very flattering to the models, few of whom started out among porn's most attractive women, even fewer of whom look quite ragged and exhausted by the time Jesse has unleashed his Monster Facial on their visages.

An unfortunately plain design rather devoid of personality keeps Jesse Loads Monster Facials from really reaching for iconic status. It also makes it somewhat awkward to get around as models

None of the updates are dated here, leaving no clue as to when they arrived, how much time elapsed between updates, or whether further additions to the archive are to be expected. It's amazing how much uncertainty and distrust the omission of a few numbers can result in, isn't it?