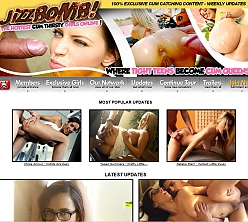 Wouldn't it be great to choose a performer, hit her profile page, and be regaled with all kinds of biographical information, perhaps as well as a brief interview about said performer's appreciation of ejaculate in all its forms and methods of delivery? Well, you'll find nothing of the sort here, I'm afraid.