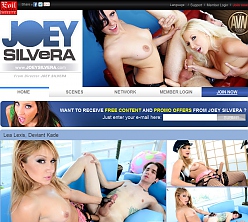 Pros:
Joey Silvera isn't the kind of pornographer to find one particular sexual activity and base his entire career around it. On his site, this site, you'll find the aforementioned female-dominated strap-on scenes, hardcore lesbian couplings, bisexual threesomes, and hardcore hetero fucking in the (relatively) normal fashion: a penis repeatedly entering a vagina or female anus.

Silvera clearly has the reputation required to enlist porn's most accomplished and impressive women. Krissy Lynn, Skin Diamond, Brooklyn Lee, Kristina Rose, Holly Michaels, Jennifer White, Inari Vachs, Aiden Starr, Andy San Dimas, London Keyes, and Roxy Jezel all give stunning performances on this site, regardless of whether they're being plugged, plugging someone else, or shouting obscenities and insults at a sissy.

New scenes are added to Silvera's 481-scene archive quite frequently: usually every two or three days. Each new update brings High Definition videos and high-res photos with it, with videos impressing in downloadable 720p and 1080p formats and 540p streams, and photos offering ample detail in their 1920px frames.

Updates are made frequently, yes, but they can also be unreliable, irregular, and fall into brief lapses of inactivity. It'd be great to see a more consistent schedule in place here, but it's certainly only a minor gripe.

Galleries might contain impressive 1920px photos that offer plenty of detail and vibrant color, but without a downloadable zip pack, it'll take you hours to open and manually save every single image. Hoarders certainly won't be happy until a zip is offered.

Of the 481 scenes currently held in Silvera's official online archive, only 176 are available for High Definition viewing. The others, I'm afraid, don't look anywhere near as good and generally peak at or around 720x480 pixels. Recent remastering efforts by other sites and studios have yielded impressive results, so let's hope Silvera takes that into consideration in the future.