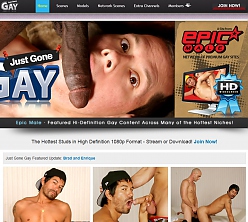 So, you've Just Gone Gay. Now what? Hell, if you're in the same situation as most of the rest of the world, you probably wanna earn some money, right? In that case, you're much like the brand-new-homos of Just Gone Gay. They too dropped to their knees and made some quick cash shooting porn. Hosting an exclusive collection of homo-hardcore that'll have you tickling your taint and kneading your knob almost immediately upon entry, Just Gone Gay takes one devoted cock-gobbler and introduces him to a guy who has only just come to terms with his homosexuality, pushing them together for some frisky frolicking of the carnal kind.

Overview:
It might be far more widely accepted than it was in the past, but whether or not to declare oneself a homosexual is still terribly confusing and overwhelming issue for many young gay men. When most of the guys at school are discussing the various myths of female sexuality, you're dreaming lustily of some guy in some band plastered all your older sister's bedroom wall and wondering what the hell to do about it. Like many gay men, the ones you'll see at Just Gone Gay have only just come out; either that or they've in fact only just recognized their homosexuality for what it is: an unquenchable desire to feel the rugged masculine body of another man rubbing up against their own bodies. You'll see plenty of that kind of thing here at Just Gone Gay. After all, just because these guys haven't been partying in The Castro for the last ten years doesn't mean they're not dying for some dick. Coming to you from the hardcore Epic Male gay porn network and promising widescreen High Definition videos that'll blow your socks off, Just Gone Gay looks very impressive and exciting from the outside, but isn't it what's inside that really counts? If these tour previews are anything to go by, inside Just Gone Gay is a collection of gorgeously photographed hunks busting their all-male cherries in graphic hardcore gay sex scenes guaranteed to have you standing at erect attention in no time at all. Welcome to the world of homosexual pornography, fellas!

Pros:
Everything found inside Just Gone Gay is exclusive to the site and won't be found elsewhere, scattered around the 'net like a useless piece of junk. These hardcore scenes are some pretty top quality shit and you'll no doubt enjoy watching the mouths and asses of these noob dudes enjoyable as, well, fuck.

Just Gone Gay's members have access to a collection of original gay hardcore scenes offered at a peak resolution of 1280x720 pixels, firmly placing them in the High Definition realm. The photos are also delivered in high resolutions, in most instances reaching 1066x1600 pixels and looking very nice indeed.

The hunks of burning lust seen performing in Just Gone Gay's scenes comes from a variety of backgrounds and have a range of looks and styles, from bleached-blonde twinks, chubby frat-packers, tattooed metalheads, and skaters to musclebound brothers, silver foxes, and foxy, mature DILFs.

With a discount from Mr. Pink's bringing the monthly cost down to $23.32, Just Gone Gay is even more affordable than before. Not only should the lower price whet your appetite, but so should the bonus access all members receive to every single website on the Epic Male network - all eleven of them.

Cons:
Just Gone Gay only updates once every two weeks according to the dates attached to each scene, but then those dates might not be overly reliable. Taking a look back through previously filed reports on this site, I found that the content count has remained essentially unchanged for almost 12 months and dates have been attached to scenes only recently. All scenes are now dated, meaning someone, at some point, came in and took care of labeling them properly, but they could very well be the same scenes in the same unchanged archive all this time.

By no means a small site, this isn't exactly a large one either. Currently (and possibly permanently) holding 78 videos and 71 photo galleries, there's just enough content to keep you entertained for about a month, if you stretch it out a bit. Without new clearly identified updates, pretty soon Just Gone Gay won't be interesting anyone anymore.

The tour pages promised those thinking about a Just Gone Gay membership that this site provide them with dazzling 1080p High Definition videos. Inside the members area, however, the best available video format only makes it to 720p, and a rather unsightly 720p at that. Pixilation, image distortion, and digital noise mar these HD videos.

Conclusion:
Without belaboring the was-straight-now-gay angle established on its tour pages, Just Gone Gay manages to present its members with hardcore gay porn that is fun and exciting and most definitely highly explicit, yes, but ultimately uninspired and rather repetitious. Most of the 78 scenes currently online don't really bother bringing heterosexuality, past or present, into the equation and merely show two guys getting it on in pretty basic fashion. The promised 1080p HD videos are not here, scenes instead peaking at 720p. Updates are in disarray thanks to dubious dating practices and a seemingly stagnant content collection - the numbers don't lie, folks! At the end of this admittedly brief visit, it's not looking too hot here at Just Gone Gay. Hopefully a few changes are made to bring this potentially awesome site around, 'cause right now it's about as thrilling as pussy to Oscar Wilde.