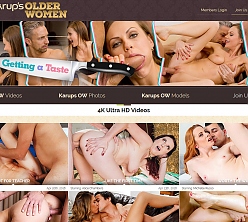 Most of the sex taking place at Karup’s OW leans on the lusty but sedate side of things. Some women are real firecrackers and erupt when touched in just the right way. Others, meanwhile, can be so subtle in their responses you may think they’re dozing. Most of the time, however, the featured model seems thrilled to be fucking one camera with an at-home audience ‘bating along.

Not only has Karup’s been providing its subscribers with 720p and 1080p HD video streams and downloads for some time now, the network has a well established 4K Ultra-HD video program now pumping out more impressive levels of detail than ever before. Hell, Karup’s OW offers more detail than most sites dealing with MILFs would even dare - and it’s awesome!

Adding something new almost every day, Karup’s OW should satisfy even those viewers with admittedly huge appetites. There’s already some 4,430 scenes online, waiting for your attention and approval, as well as more than 6,000 photo galleries and the included access to Karup’s Private Collection and Hometown Amateurs sites, making this one seriously tempting emporium of older babes.

Cons:
Most Karup’s OW updates bring new content to the site and its users, but not all. Most weeks see at least one or two updates containing older content remastered and upgraded to 720p and/or 1080p HD resolutions. While it’s nice to see quality older content likely be appreciated by members today, there’s a notable drop in visual quality and sexual energy once you started digging back into Karup’s archives. New content is far superior.

Some models barely qualify for “older women” - sure, they might actually be over 30, but you may find them too fresh-faced to be convincible MILFs. Hey, some viewers may appreciate the breadth of Karup’s definition of “older” but others may be annoyed that they’re seeing more 32-year-olds than 60-somethings.

Downloading a full UHD scene will require quite a lot of your hard drive space. Sure, terabytes aren’t as expensive as they were ten years ago, but any twenty-minute scene clocking in at nearly 6 GB may require a lot of file shuffling on your part. Even remastered scenes carry obnoxiously large file sizes.

If you’re most excited about a Karup’s membership today, right now, ‘cause of the allure of 4K videos - beware! There’s no keyword tag for 4K content, nor is there any easy method of browsing 4K scenes to the exclusion of all else. The same applies to the HD content, actually. If you want to avoid anything presented in SD or from an SD source, that may be tough.

Conclusion:
Like the two other Karup’s properties, Private Collection and Hometown Amateurs, Karup’s Older Women does a fine job of serving its members with regular doses of hardcore (and assorted) updates. Now offering 4K videos that, though not always easy to find, deliver incredibly clear images to your screen, 4K monitor or otherwise, Karup’s OW is clearly a contender for porn’s premiere MILF site. Ok, so that might be pushing it a bit. Navigation issues and a somewhat dated visual style could be considered minor problems, but others may disagree. When you do find a scene that makes your MILF-boner spring to attention (and especially if it’s in 4K), Karup’s can deliver powerfully sexy, authentic, chemistry-rich scenes starring women who really know how to draw every iota of pleasure from their partners. Network access sweetens the deal and makes Karup’s OW damn near irresistible to MILF-lovers all over. Or, at least, it should.