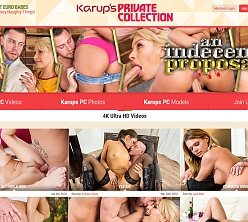 Pros:
Stunning Euro models line the pages of Karup’s PC, greeting members with a smile before shedding any remaining clothes and getting down to more explicit business. Notable names appear alongside relative unknowns, the former including such devastating hotties as Angel Piaf, Angelina Brill, Amirah Adara, and Valentina Nappi (here called Valentina Moon). Some of the more bold American performers like Kat Dior also jump into the fray.

Advertising its 4K Ultra-HD video program like Pepsi in India, Karup’s PC brings its clarity-obsessed members a good dose of 4K smut. With 4K viewing limited to downloads, streams playback in 720p and/or 1080p. It’s clear some content has undergone remastering in HD and, generally, it looks quite good. Photo galleries don’t slouch either, presenting online and downloadable galleries in multiple resolutions, the best being a crisp, colorful 3000px.

Karup’s PC seems to update every day but Monday, once again confirming that Monday was indeed a shitty idea. Boasting an already hefty archive of more than 6,500 scenes - give or take; it’s hard to tell - this hardcore haven covers a range of styles, eras, sex acts, and scenarios, and throws in access to two other network sites, Karup’s Hometown Amateurs and Karup’s Older Women, absolutely free!

Cons:
The entire Karup’s empire lacks the kind of solid web construction and navigation features needed to fully enjoy its offerings. Not only is it impossible to do a count only of Karup’s PC’s content, disregarding the two other sites, but the now combined network archive can be a bit of a chore to wade through. More tools like keyword tags and category listings would really help members get around more swiftly.

All you greedy little pixel hounds salivating at the thought of Karup’s PC’s endless supply of 4K smut should prepare for disappointment. There’s literally no way to tell just how many 4K updates are available here. Each scene’s maximum video resolution is only revealed after you’ve chosen it from a menu and set to finding the Play or Download buttons.

Many recent updates lack 4K video options and peak at either 1080p or 720p HD resolutions. Not only that but there is arguably an too-large turnout from remastered archival content among recent updates. Is Karup’s production power waning, forcing a return to content shot years ago? Man, let’s hope not!

Conclusion:
Karup’s Private Collection pulls from all eras of Karup’s history, updating on an almost daily basis with something delectable and, most likely, High Definition. The modest range of 4K Ultra-HD updates deliver very powerful levels of detail, but they are the minority. At 1080p and, less so at 720p, the HD videos prove more than adequate in streams and downloads. It will, of course, be great to see a flood of 4K smut to the Karup’s network as the tech becomes more ubiquitous. We’re not there yet, though. The sex varies between tangibly steamy hookups clearly enjoyed by all and those pairings or solo scenes that almost completely lack heat. Dated archival updates won’t win over too many fans occupying spots on the update schedule, though longtime fans may appreciate the HD upgrades. The real advantage to a Karup’s PC membership today is the included network access, which opens you up to a seriously expansive collection of pornographic wonders. Keep a close eye on this one, though, folks, as the impending 4K influx will once again make Karup’s PC a hot porno commodity.