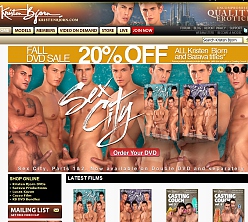 Noted producer of gay adult films, Kristen Bjorn has been making some of the hottest man-on-man pornography since 1982 and has been praised by William Higgins (one of Bjorn’s acclaimed contemporaries), thusly: [in] the relatively brief history of hardcore gay videos, Kristen Bjorn has emerged unchallenged as the best director to date." Given such lofty accolades, Bjorn’s self-titled website can be assumed to host a staggeringly impressive collection of the best all-male hardcore sex videos and photos in the world. Is that the case, though? Does Kristen Bjorn live up to his glowing reputation with this, his official online home? The straight, but definitely not narrow, investigation begins right here at Mr. Pink’s!

Overview:
When the name Kristen Bjorn first appeared on the Mr. Pink’s review schedule, I mistakenly assumed I’d have the pleasure of ogling a slim but busty, blonde-haired, blue-eye nordic goddess on a website devoted to depicting her in a brilliantly beautiful array of high quality erotica. Inputting the url and landing on the tour page, however, I am greeted, as will you be, by hairy-chested hunks. Turns out Kristen Bjorn is one of Britain’s leading directors and producers of hardcore gay pornography. Starting out in front of the camera then later taking control of his career and casting young hopefuls in his never-ending series of globe-trotting all-male adult films, Bjorn has since built a mini-empire all his own. His official self-titled website is Bjorn’s online home and promises his fans, should they pay the $27.95 monthly membership fee, will receive access to Bjorn’s collection of exclusive original productions shot in exotic locations like Rio, Caracas, Havana, Sydney, and Budapest. Promising “uncompromising quality and eroticism,” Bjorn’s work offers you the chance to indulge in a little vicarious globe-trotting of your own, meeting some of the worlds sexiest men along the way.

Pros:
Collecting more than 500 original hardcore productions and hosting them exclusively here, Kristen Bjorn’s site is a rather large archive of some of gay porn’s premiere movie and photo work, all of it shot in Bjorn’s lush and lusty signature style.

All photo and video content is split into categories, making for easy browsing. Photos fit either Single or Group Model Layouts, Movie Stills, or Behind the Scenes gallery types while videos are sorted into Exclusive Premieres, Casting Couch, Movie Scenes, Lover’s Lane, Makin’ It, and Lucas Kazan Scenes.

Cons:
Updates are allegedly arriving on a weekly basis in multiple areas of the site. There are, however, no dates attached to content items and we’re therefore left to hope for the best and assume updates are actually arriving that frequently; although, with so many different sections and no central update list, who has any idea?

Much of the content looks quite dated and wouldn’t look out of place among VHS beefcake movies of the late-80s and early-90s. That might be great for the nostalgic members, but I’m sure most would want something a little more dynamic.

For all the effort Bjorn has put into the photography of his films, they are quite poorly presented here on his website, with video resolutions generally only reaching 640x480 pixels and looking, I’m afraid, rather drab and lifeless. Photos also look quite bland and don’t offer much detail at just 512x768 pixels.

DRM is attached to most content, meaning you’ll only be able to view it while your membership is current and active. The majority of the videos are also unfortunately unavailable in full to members, requiring an additional purchase. You are provided with free preview clips, but who wants to tease their libido any further when you can’t have the real deal?

Conclusion:
While his contemporaries heap praise upon him and industry bodies award him with accolade after accolade, only you can decide whether Kristen Bjorn really is (if you’ll excuse the language) “the shit”! His website, named after himself, offers fans of gay hardcore some rather enticing morsels in photo and video form, but they unfortunately don’t look anywhere near as good as his supposedly lush visual style demands. Instead, members have to make do with lackluster resolutions, dated stylization, and far too many clipped videos that can only be viewed in full after shelling out more cash. Kristen Bjorn has clearly earned his place at the top of the heap, but if his website is any indication, the throne is ripe for the seizing.