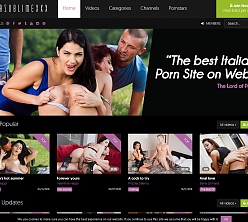 From the aforementioned goddess of Scafati herself, Valentina Nappi, to Russians Crystal Greenvelle, Kira Thorn, and Evelina Darling, to Czech beauties Bella Claire and Lucy Li, the women featured in La Sublime XXX’s encounters are sultry babes with great on-camera skills. Seducing their partners (or being seduced) and bringing both themselves and their men or women to the heights of pleasure, this cast is world class.

Imagery is another of La Sublime XXX’s strong suits. Shot with a misty atmosphere in some instances, a bold and glossy sheen in others, scenes are visually rich from the get-go and manage to playback via streaming or downloadable videos high in detail. Video resolutions peak at 1080p while photo galleries, which accompany all scenes, hit 1920px online and zipped.

Cons:
Video streams play in a slightly odd way within your browser window, the containing frame remaining the same size whether you’re viewing a 240p or 1080p version of your chosen episode. Throw the video into full screen mode and you’l notice the difference in quality but it can be hard to see much point to viewing HD videos plainly on the page when they’re presented so small.