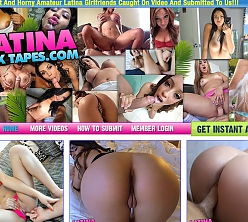 Kim Kardashian, Fred Durst, Pamela Anderson, Paris Hilton, Rob Lowe, and Hulk Hogan have all had sex tapes either stolen, "leaked," or sold, but they're celebrities (and some has-beens) we've seen a billion times before. Why is that of interest? Why aren't people going batshit over amateur sex tapes? Latina Sex Tapes, an "amateur" Mofos site focusing on women of South and Central American descent, serves up almost 200 exclusive POV-shot hardcore movies that take you into the bedrooms of total (but not complete) strangers to watch them fuck as only a real couple does. Ok, so there might be plenty of professional porn talent here, but that doesn't make Latina Sex Tapes any less thrilling… or does it?

Overview:
For those of us who've never managed to make it with a Latina, we can only dream of their legendary sexual prowess and enthusiasm, their curvy bodies and wide range of skin tones, and those incredible accents urging us on as we (hopefully) prove worthy of their intimate company. Those of us who have had the pleasure… well, it could look a lot like Latina Sex Tapes in your memory bank. A Mofos site built around the idea that guys fucking Latina hotties would be so thrilled with that fact they'd shoot and send in amateur hardcore videos to be published online for all to see. While the claims of amateur authenticity might lean towards the bogus, it's impossible to deny that those stunning Colombian, Mexican, Puerto Rican, Cuban, and Salvadoran girls (among others) flirting with you through the magic of Internet imagery are some of the most fuckable babes on the planet! Latina Sex Tapes is largely shot in an intimate POV style that often gives stunning views of the girls' bodies as they writhe around on "your" dick. Costing $29.98-a-month to access, but included as part of the famously depraved Mofos network, Latina Sex Tapes promises its members plenty of thrills. Let's find out if these Latinas are as hot as legend tells, shall we?

Although the POV shooting style in use here can prove intimate and visually stunning in the right hands, the Mofos crew tends to feature unsteady camerawork that loses focus and frame, missing many pieces of the action and what would be amazing shots of the girls mid-coitus.

Scene synopses are hidden on all Mofos sites by default and must be manually turned on. Even then, they remain visible only on the main scene index and not even on each scene's viewing page! This can make finding your perfect scene harder than most would like and could easily be remedied.