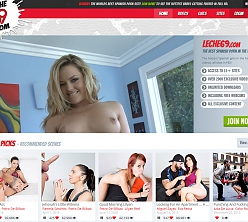 Overview:
You may have indulged in such dairy-based delicacies as dulce de leche, cafe con leche, or leche merengada and had your taste buds snapped to complete, devoted attention, but there’s another tasty, milky treat spreading out from its origins in Spain’s more sordid communities: Leche69. Part of the infamous Stiffia Network and arguably Spain’s most popular porno endeavor worldwide, Leche69 sees busty, beautiful Euro babes lining up to test their hardcore mettle against the thickest, hardest cocks in all of España. Claiming to hold more than 2000 videos, all of them exclusive and each one showcasing another depraved encounter between high-energy hardcore performers, this epic hardcore site vows to leave every viewer reeling from the wild and adventurous fucking captured here in awesome HD episodes. Charging $29.95 for monthly access but promising a world of carnal delights wrapped up in 1080p packages and delivered on the regular, Leche69 has made itself very, very hard to resist.

Pros:
The wonderful women of Leche69 are, generally speaking, very well endowed with curvaceous figures that flat-out scream sexual bliss to passing men. Models such as Nikki Litte, Jessica Blue, Yaiza Del Mar, Lilyan Red, and Valentina Bianco sizzle on the small screen, throwing their incredible figures and wanton expressions at the cocks and cunts of strangers and friends alike.

Most Leche69 updates are presented in 1080p High Definition videos both streaming and downloadable. Some fall back to 720p peaks and others appear only in SD sizes. The 1080p videos look very good indeed, loaded with vivid color for an almost cartoonish look. Photo galleries are often available and can reach 2000px both online and zipped.

A heavy portion of Leche69’s movies were produced in recent history but not within the last two years. Already carrying a slightly dated style and level of image quality, these titles and scenes are less likely to appear in 1080p or 720p and are bring a noticeable drop in quality, visually, sexually, and artistically.

With nothing new added to the archive since December 2016, it’s unclear how bright Leche69’s future will be. Many other Stiffia sites update at a frenetic pace while others don’t update at all. Even if Leche69 isn’t going to be the latter, it’d be awesome to find its producers still managing to shoot and share new smut.

Spanish language dialog will suit those who can understand an eavesdropped conversation but those unable to speak or understand Spanish will be left in the dark. No English subtitles have been provided and most scenes, it seems, are given completely in Spanish.

Conclusion:
Leche69’s brash, irreverent style fits in the tradition of the Bang Bros and Mofos crew, but with a language barrier and some low-quality content taking up space on this Stiffia-operated site, there are certainly improvements that could be made. A very strong archive of 1000 scenes should bring most deviant viewers plenty of hot hardcore action to enjoy but the lack of recent updates makes it difficult to develop confidence in Leche69’s future. Similarly, without bonus site access from Stiff’s huge roster of porn entities, Leche69 does somehow seem a bit too limited in scope and style. Spanish dialog adds authenticity and believability to these foreign-shot scenes, though English subtitles would definitely help many members follow the “plot,” as it were. Leche69 is large, loud, and mightily lascivious, but there’s still room for improvement.