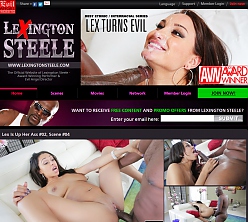 If you've never seen Lexington Steele in action, you're like a hockey fan that never saw Wayne Gretzky or a Basketball fan that missed the reign of Jordan. Lex Steele, once a Catholic Wall Street trader, gave up the conventional life to share his immense gift with the world. And by "gift" I mean the penis he so famously slides into the orifices of porn's hottest women. Members of Lex's official website enjoy 1080p HD video streams and downloads of many of Lex's finest works both behind and in front of the camera. The man's a legend, see! Praise Lex Steele!

Alongside those women whom Lex celebrates with their own feature title, this archive also hosts dozens and dozens of porn's sexiest, sluttiest women, most of whom seem thrilled to be paired with Lex and his huge cock. Sophie Dee, Krissy Lynn, London Keyes, Kiara Mia, Phoenix Marie, Skin Diamond, and Abella Danger, among many others, are here to test their mettle on the infamous Lex Steele.

Shot in and ready to be viewed at 720p and 1080p resolutions, Lex's High Definition A/V treats delight with incredible detail that perfectly captures the visually rich interracial couplings, group sex activity, each and every curve of every model's body whether thick and mature or toned and teenage, and Lex's own ultra-impressive cock. Photo galleries also serve good-looking shots in 1920px frames, online and zipped.

Updates are a bit erratic here at Lex Steele HQ. Sometimes you'll find two full DVDs arriving within a single month. At others, you'll only get one DVD every two months. Scene-by-scene, members can expect daily updates from the same DVD title until said title is fully online. Then it's another month-long wait for the next title to arrive.