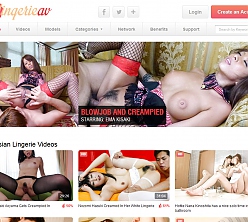 Known for their elegance, poise, mannered demeanor, the historically accepted Japanese female was almost legendarily submissive. It kinda makes sense then that there'd be an entire website devoted to women who've gone to great lengths to dress to impress. Beneath the most visible layer of clothing lies a few pieces of expertly crafted undergarmentry that, far from diminishing the natural (read: naked) beauty of a women, actually amplifies it to astonishing heights.

Overview:
Glamorous Japanese women might often be seen wearing kimonos and cosplaying outfits on adult websites, but there's a much more straightforwardly sexy style of garment that also gets celebrated by those kinky Japanese pornographers: Lingerie AV proves this with an offering of harlots and hussies so perfectly gussied up in the most enticing of feminine garmentry - I'm talkin' bras, panties, garters, hosiery, corsets, thongs, and one-pieces, folks, in all the colors of the rainbow - you simply cannot say "No!" Costing $29.95 a month to access but acting as a gateway not just to an archive of lingerie-themed smut, but an entire network of Japanese hardcore porn as raw and uncensored as those thoughts you think about that pretty girl who's always restocking the rice cakes at your local Asian grocer. Does she wear stuff like this underneath her t-shirt, jeans, and orange apron or does she reserve her more decorative undergarments for when she's expecting company? Is she as eager and adventurous as the women of Lingerie AV? I doubt it, so perhaps you'd best stick with them for now.

And, to top it all off, you'll be watching all the naughtiness unfold in spiffy High Definition video formats of 1076px and photos nearing 1400 and in some cases 2000px. Videos can be streamed or downloaded and deliver clear, precise imagery throughout the often visually outlandish scenes.

New scenes are added to Lingerie AV's existing 449-scene archive fairly often and, when paired with the free JAV HD network access which all members are granted, makes for one huge helping of hardcore Japanese smut - and for only $19.95 a month, too!

Updates usually arrive quite frequently here at Lingerie AV, roughly every two or three days. There has been, however, a few periods of a couple of months where nothing new was added and no notice about the temporary lapse in activity was given.

The network hub pages on other JAV HD sites show Lingerie AV as holding well over 1,000 scenes. Clearly, that is not actually the case and less than half that number are actually available. Perhaps if some fact-checking and quality-control measures were in place at JAV HD, this mistake (or lie) wouldn't make it online.

Conclusion:
Lingerie AV continues JAV HD's string of fairly impressive, but by no means perfect uncensored Japanese niche hardcore sites. Although Lingerie AV's devotion to its stated niche interest wavers far more than it probably should - lingerie is seen then removed before sex far too frequently - the many, many scenes paying dutiful and enthusiastic attention to the various forms of underwear worn by the models are a real treat. It's rare to find Japanese hardcore that hasn't been ruined by censors and JAV HD's completely uncensored hardcore is some of the finest on the 'net. It's the small things that matter, though: sporadic updates; content appearing on multiple JAV HD sites; no zipped photo galleries etc. If you can forgive its handful of shortcomings and find both Japanese women and seductive lingerie huge turn-ons, don't pass by Lingerie AV without taking a good long look.