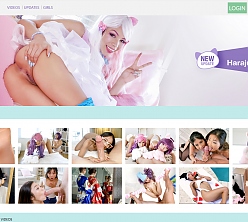 Members enjoy all that Little Asians has to offer courtesy of 1080p and 720p HD video streams and downloads. Bright colors with lots off pink, purple, and pastel hues give the site a slightly cartoonish feeling and candy-coated flavor. Image quality is very high and the footage has clearly been shot on UHD sources.

Although quite small on its own, Little Asians is just one part of the massive Team Skeet network. Opening new concept sites every few months and constantly churning out an epic stream of excellent HD smut on its many, many websites, Team Skeet is one of porn’s must-see networks, and it’s free to Little Asians subscribers, who can also now join for just $14.87!

Many new Team Skeet ventures only produce a few dozen scenes before shifting into idle mode as the attention of creators goes to some new fad or trend. How long will Little Asians continue creating original smut for Team Skeet members? It’s really impossible to predict at this stage, though the lack of another Asian-focused Team Skeet site suggest this one could stick around.

Some stereotypes were made to be broken. The idea of Asian women being uniformly demure, timid, and attracted to Western men plays out here like a fairly immature Western fantasy. That makes sense - Team Skeet IS a Western fantasy - but unboxing a love doll played by a real woman (Sami Parker) essentially “playing dead” the whole scene may rub some the wrong way.