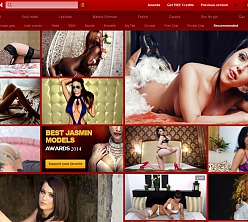 Pros:
Hundreds and hundreds of foxy women line the Live Jasmin performers roster. The cam girls hail from all around the world with many from Europe and the USA proving very popular. From short-haired hotties with tattoos and bad 'tudes to bubbly blonde cheerleader types, exotic Asian goddesses, Middle-Eastern beauties with covered heads, and devastatingly sexy Euro stunners can be found throughout Live Jasmin.

JasminTV caters to the webcam fan with specific tastes, capturing live broadcast moments and combining them with pre-shot footage of, for example, Bathroom Babes, Gamer Girls, Beach Bodies, Tattoo Treasures, Fashion Fans and Roleplay Fantasy. Hell, there's even a Twerk Zone for all you hip-hoppin' ass-men out there! Each JasminTV show serves up tasty footage of very sexy women cavorting and posing for you.

At any given time, Live Jasmin will feature a few hundred models broadcasting live. Some will show off their bodies without hesitation. Others will lure you into a private show for further intimacy. Whatever path you choose, Live Jasmin has a ton of gorgeous, charming women waiting behind their webcams for you.

Many Live Jasmin performers offer littler more than softcore teasing shows, exposing nothing in free chat and very little in private, instead taking the opportunity to try to coax more money out of you before even a nipple is made visible. Other girls will respond to a request for bare breast with a bored expression and very brief boob-squashing raising of her shirt.

If English is the only language you speak and the one you demand the objects of your masturbatory obsession do too, Live Jasmin's multi-lingual performer roster might give you pause. Imagine finding the most stunning redhead you've ever seen - perfect face, figure, and taste in bedroom furnishings - only to find her very poor English skills and almost indecipherable accent impossible to enjoy.

Video issues plague many webcam sites and Live Jasmin is hardly an exception. Some broadcasters stream in brilliant, detail-rich frames while others appear to be live-streaming from a first-generation smart-phone set to "Low Quality." Unfortunately, price isn't always determined by video quality, leaving some excellent performers looking drab on their expensive but low-grade streams.

Conclusion:
It takes a well-appointed gentlemen to fully engage with and embrace the often expensive world of live adult webcam performance, so, while Live Jasmin might not be for everyone - especially not those on a tight budget - those that do venture inside its huge catalog of performers and performances both live and archived will most likely find more than a few babes to ogle for hours on end. JasminTV serves up curated broadcasts containing compiled footage of super-sexy women in various situations and styles, from nerdy glasses-wearers to tattooed "bad girls" and flirtatious fashionistas. Compared to some of the more recently notable webcam sites, however, Live Jasmin seems a bit outdated, lacking in genuine personalities, and feeling a bit more blandly corporate than some more colorful cam sites. It's also an expensive undertaking, unless of course you're just here to sample previews, which will likely leave you angling for a personal loan, mere teases as they are. Live Jasmin, really, is one big tease. How you feel about that and what it does to your lower external organs will depend largely, however, on you.