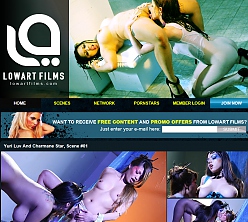 Porn is rarely considered art, which makes Low Art Films' decision to include the A-word in its very name a bold one indeed. With dark, high-contrast lighting, plenty of fake rain (among other liquids) and some of porn's most dazzling performers, Low Art Films seems set to rock you right outta your hole-riddled old football socks. Or, it would if there were any recent or forthcoming updates to gawk at. What does the future hold for Low Art Films? It's too early to say at this stage, but, as always, Mr. Pink is about to dig deeper and deeper into the sordid and saucy world of Low Art Films.

Overview:
Pornographers are usually a pretty boastful bunch, declaring their studios or their latest release "groundbreaking" when it's just sub-standard gonzo porn, proclaiming their newest exclusively contracted performer "the most beautiful woman in the world" when she's a slightly less horse-faced SJP… At Low Art Films, however, the folks behind the scenes seem to be hedging their bets. What they produce is art, alright, but it's so far down on the artistic totem pole it's just a notch above Jersey Shore. Is that what they mean by "Low Art" or are they positioning their creations as coming from the underworld to take new life as erotic artworks of the highest calibre? Looking at the tour pages filled the evocatively lit and exquisitely photographed pussies, assholes, and rigid male members, however, it doesn't seem all that unbelievable that those wielding the cameras and clapper-boards on Low Art Films' sets are attempting to create powerful works of carnal art. You've got two options, fellas: either follow along with me and learn everything there is to know about Low Art Films online home or chance it and potentially blow $29.95 on a site you won't like. Already, if it adds incentive I'll even throw in an off-color joke or two. Low Art Films… prepare to be Pinked!

A Fame Digital network is included in all membership packages and gives you access to the sites of Tera Patrick, Peter North, Silvia Saint, Rocco Siffredi and five of porn's hottest studios. Always looking out for my bros (ie: you, dude!), I've snagged you all a deal: get a month of Low Art Films (and therefore Fame Digital) access for the pissy little amount of $14.95! Score!

Cons:
Nothing new has been added to Low Art films in about eight months. That doesn't mean there isn't anything on the horizon, not exactly, but it sure as shit doesn't look like this site has a rosy future ahead.

Even before the updates disappeared faster than Soulja Boy Tell 'Em post-Pretty Boy Swag, Low Art was struggling to build a sizable collection. Now, with just 82 scenes and 75 photo galleries, there really isn't that much here at all. You'll no doubt end up being far more familiar with the other Fame Digital sites.

There are plenty of models appearing here under different names or misspelled versions of their usual names, sometimes both… on the same site! Dylan Ryder is also Dillan Ryder, Chayse Evans is also Chase, Charley Chase is also Charlie, Shyla Stylez can be seen here as Styles, and even poor old Anthony Rosano suffers the indignity of seeing some jerk named Anthony Rosana. Oh, the humiliation.

Conclusion:
Low Art Films is a tough site to review. After all, it hosts some very exciting porn, both visually and carnally speaking, and has drawn top names to its studios, yet it hasn't updated in eight months and shows no signs of imminent revival. If it's dead, it has left an extremely good looking corpse, but if it's just sleeping, I wish it'd wake the fuck up already. With just 82 scenes online and only 75 galleries, Low Art's members will no doubt find themselves wandering through the rest of the Fame Digital network they've (thankfully) been granted access to. Low Art's style - moody lighting, lots of rain scenes, and straightforward (but never boring) hardcore sex - is a great one and it'd be a shame to see this site disappear altogether, but without a revival that's where it's headed.