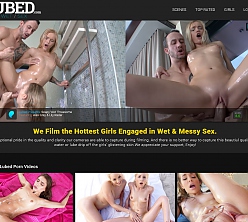 With summer right around the corner, it’s the perfect time to lay down beside the pool in your shorts and, uh, pour oil on the nubile body of your favorite pornstar hottie. That may sound like utter fantasy - and it is - but at Lubed, a site from the Passion HD people loaded with today’s sexiest, sluttiest performers, that’s exactly the kind of thing that kicks off each sordid episode of hardcore sex. Aided by the use of slippery wet oils that turn these already stunning girls into glistening sex goddesses, Lubed is a glorious showcase of all kinds of female bodies.

Lubed wouldn’t really be doing its job if it didn’t deliver powerful audio-visuals to capture such thrilling body-worshipping smut. Thankfully, 4K Ultra-HD videos are ready for download and 1080p HD videos sit online waiting to be streamed. Like the videos, photo galleries capture lush and lascivious shots of the shiny, sexy girls at play.

Lubed members will find at least 150 scenes already waiting for them when they log in. With another arriving every week in awesome UHD and HD frames, this archive is a booming haven of wet-and-juicy hardcore thrills. Now offering a discount deal that’ll slide you inside for only $17.95-a-month, Lubed is unmissable!

Cons:
As awesome as Lubed’s epic oil-coated fuck-fests are, finding your way from one to another with any sense of purpose or logic is next to impossible. Tags are absent from all scene pages and there’s no search function to speak of. It’d be fantastic to see some improvement to how this site operates and more tools available for members.

Access to other Passion HD company sites has not been included in Lubed membership packages. To access such excellent little outlets as Holed, Exotic4K, and Passion HD itself, you’re going to have to pony up some more dough. If you’d rather not, then you’d better be prepared to ignore all the tantalizing links and previews about to be thrown your way.

Wondering which awesome Lubed encounter to enjoy while unzipped? You’re not given a lot to go on, really, just the female performers’ names and a title. There’s no scene synopses, tag cloud, or filmstrip-style preview to provide details on what’s about to happen, only the most basic info from which to base your beat-off viewing.