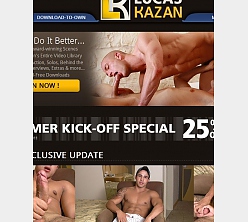 Pros:
Kazan is one of gay porn’s most respected and revered producers and directors and his work has been hailed as offering the highest productions values seen thus far in homosexual hardcore. The visual potency of his work is well presented here on Lucas Kazan, his official website.

Lucas Kazan has recently added High Definition content to its archives. The Reality Series page may only offer six HD scenes, but they present a vast improvement over the usually mediocre video standards otherwise displayed here. We can only hope the entire site moves into HD territory soon.

The collection of video content available exclusively at Lucas Kazan offers 24 short films, sixteen features containing 139 scenes, six softcore titles with 30 scenes, and 137 scenes that fall under the Reality Series banner. All in all, an impressive collection.

Cons:
Very few of Kazan’s videos are available in downloadable formats. Only the Reality Series scenes offer any download options at all; the rest are limited to streaming. Of the HD scenes, the largest resolution you can download is 960x540, not the 1280x720 pixel HD minimum we’ve come to expect.

Lucas Kazan’s undated content makes it difficult to determine what the site’s update schedule might actually be. Since the last time Mr. Pink’s took a look at Kazan’s site the content count hasn’t increased a huge amount, at least, not in the photo department. Makes me wonder how frequently new material is added and if it’s really all that new.