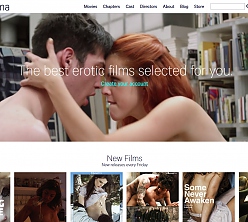 Lauded director Erika Lust has produced some of the most original and inspired pornographic motion pictures of the last thirty years and she’s done it all in a remarkably brief period of time. Now online via the Stiffia network, Lust Cinema showcases the best of Ms. Lust and company’s breathtaking work. With a cast of Europeans and Americans, amateurs and pros, and some startling cinematography and editing on display, Lust Cinema is among the most brilliant of Stiffia’s many sites - and that’s saying something.

Stella Cox, Sam Bentley, Ava Dalush, Asa Akira, India Summer, and Lily Labeau are among those stars lending their talents to Lust Cinema works. The male contingent is also quite impressive and should have the ladies loving Lust’s releases as much as the guys. The artfully shot movies reach 1080p HD resolutions in streams and downloads, photos in 1500px frames, and both provide views of the stars and sex you’ve likely never even dreamt of.

Conclusion:
Lust Cinema’s only real issues arise due to its inclusion in the greater Stiffia family. Navigation is hardly great and it may take many members some time to find exactly what they’re looking for, previews also rarely being that forthcoming. Image quality of videos sits at 1080p, stills at 1500px and both look marvelous, the bodies of the very sexy performers captured in adoring close-ups and full-body shots that push the classic European touch to intense new heights. Expect some pretty inventive camerawork and editing to add flourish to many scenes; on occasion these touches can seem a bit overpowering. Also expect a fair bit of bisexual, homosexual, and very fluid activity among the otherwise femme-filled archive. Updates arrive less frequently than advertised but still quick enough to keep you flocking back to this most enticing Stiffia-hosted site.