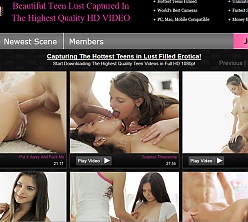 Lust knows no language barrier or national border. Lust is international, animal, and unstoppable. Lust HD, however, is clearly a European effort that's housed, surprisingly enough, on an almost entirely American network: Team Skeet. Making the most of this association, Lust HD serves up an appetizing (if small) platter of hardcore erotica as only the Europeans can make it. The fresh-faced Russian models are photographed beautifully and deliver convincing performances at the end of any number of stiff dicks. It might be the odd site out on Team Skeet's servers, but Lust HD is definitely worth watching.

Shot in High Definition formats and available for viewing at 540p, 720p, and 1080p resolutions, Lust HD's streaming and downloadable videos are very attractive. Bathed in soft, naturalistic light and gently decorated bedrooms and lounges, the girls' bodies are rendered beautifully, their smooth skin and pretty faces catching your eye in any number of ways. Photos fare a little better here than on most Team Skeet sites, too, which is cool.

Cons:
As stated above, Lust HD is a small site. Launched only a year ago, the site has been updating steadily but still holds only 52 scenes. Without Team Skeet network access, there wouldn't be enough here to hold many viewers' attention for very long. So, be very grateful, future Lust HD members that Team Skeet picked this site up.

Where did Lust HD come from and why is it part of Team Skeet, a network otherwise dealing with teenage and twenty-something North Americans in POV-shot pseudo-amateur productions. Is Team Skeet even behind the creation of this blatantly European production? I doubt it. Whatever the case, Lust HD remains a curious entity, a compelling site on its own but an awkward part of an otherwise cohesive network.

An abundance of ads clutters up the many Lust HD pages, getting in the way of your browsing and ogling of the young ladies. The worst instance lies in the middle of the the main update listing, where you'll no doubt spot (and almost click) an animated ad for a webcam site that, although branded with Team Skeet's name and logo, is just a feed coming from elsewhere.

Conclusion:
Lust HD's 52 scenes are exclusive to this site and, as far as I can tell, were originally produced for it too. Why a European hardcore erotica site is being included in the otherwise-US-produced Team Skeet is beyond me, folks, but it's not exactly a bad move. Adding a dose of international flavor to the network, Lust HD clearly sets itself apart from other Team Skeet sites. But that's a good thing, for the most part, as it brings more variety to the network thanks to its softer, more picturesque photography and sensual yet defiantly hardcore sex. HD videos deliver vibrant imagery that never loses its sense of romance however deeply the featured female assholes are penetrated and photos, while not exactly the best in the game, do much the same in still form. Lust HD's major problem is, as mentioned, its small size. Updates are continuing to arrive every week and there's no sign the site is nearing its end, so those with ample patience might want to wait before jumping on board at this early stage. Those already interested in Team Skeet's offerings who merely want a bit more stylistic variety have no excuse for missing out.