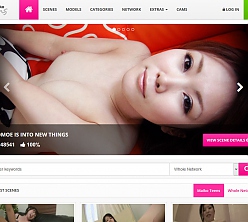 Left untranslated, it's easy to assume the high-pitched sounds of Maiko Teens young women are disapproving or uncooperative. Apparently, they're as positive as can be. Japanese seem to have a wildly different national sexuality than Westerners, but Maiko Teens is a relatively tame example of that and simply showcases a bevy of young Asian sluts eager to master (and in some cases learn) the various sexual arts. Shot and presented in HD, Maiko Teens is a hardcore J-porn site as familiar as it is curious, and it's all the better for it.

Pros:
Small in stature but livelier and more vocal than Joan Rivers in full flight, Maiko Teens' models are much younger than those you'd find at Maiko MILFs and, in all likelihood, less experienced. That doesn't stop them from being picked up in public by a camera-wielding guy and led back to his place (or a love motel) for some naked wrestling. The girls can seem a little uncomfortable, but that's their enjoyment showing (apparently).

Shot in a simple, almost homemade style, most Maiko Teens scenes offer good views of the models as they wriggle and writhe around in fits of pleasure. Online streams can be viewed at Low and High Bandwidth standards while downloads reach High Definition resolutions with a 1080p MOV the best of the lot.

There's a solid archive here at Maiko Teens thanks to the weekly updates that have delivered more than 200 scenes at writing. Also included in every Maiko Teens membership is free access to Maiko MILFs and Maiko Creampies, both of which also update weekly and combined provide another 400-or-so scenes.

Cons:
Maiko Teens only hosts Japanese content, so, unless you know what "Nihongo ga wakarimasu ka?" means you won't be following any of the untranslated dialog featured in these scenes. There's thankfully little talking in most, but when dialog is presents it seems crucial.

After testing out Maiko Teens with my standard browser, Firefox, I noticed that video streams were not appearing on the video pages, only a large play button superimposed over the top of a given scene's date, runtime, and view count information. Using Google Chrome solved this issue and saw streams play fluidly, but Firefox incompatibility is nothing to ignore.

Maiko Teens offers a gallery of photos alongside every scene but, unfortunately, these images are limited to 1600px resolutions that don't exactly amaze with their clarity and detail. Now, 3000px, 4000px, and 5000px, they're more likely to impress and deliver strong shots of the lusty models. Perhaps an upgrade is in the works. Let's hope so.

Every woman featured on Maiko Teens has been given a place on the model roster, where you'll find links to their posted work and… nothing more. No doubt leaving many members frustrated, model profiles are devoid of any biographical information. I guess it's a mish-mash of worthwhile results and utter gibberish in the Google search results for you, would-be superfan!

Conclusion:
It might seem like most Japanese women in porn are teens, but that's just the lasting youthfulness of many Japanese keeping them marketable as "teens" well into their twenties and possibly their thirties. Maiko Teens, however, seems fairly on target, age-wise, and mostly features models in their very early twenties. (Not that there's any biographical info available to confirm that or anything!) The sex is far from dull, with frenetic floor romps, lush bedroom sets, baths both public and private, and many bare studios acting hosting degeneracy from nipple-biting to ass-fucking, gangbangs to cumbaths. High Definition videos reach 1080p and look fairly good, if a little color-drained, streaming and downloading with ease for all… except for Firefox users, who'll have a streaming problem to avoid. Dialog has been left untranslated, which might be a problem for some viewers (though I doubt the words are on par with Chekov), but Maiko Teens is solid and effective overall, providing plenty of J-porn fans with plenty a little to avoid, yes, but plenty more to enjoy.