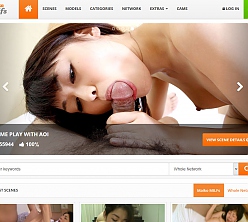 Maiko might be a Japanese word referring to apprentice Geisha, but the women featured in Maiko MILFs' uncensored hardcore movies are far from inexperienced teens. They may behave in a slightly nervous way, giggling and shrieking from time to time, but that's the legendary submissiveness of the Japanese woman coming in. Rest assured, Maiko's MILFs are fine ladies indeed, well versed in all manner of sexual expression, and they're eager to make your acquaintance.

Pros:
Ranging from barely-30 to well into their 50s, the women of Maiko MILFs are more mature than, say, those appearing at Maiko Teens. There's a general weariness to some of the models that only disappears once they start sucking or fucking, a weariness that gives this whole site an atmosphere of "I've been working my whole life, struggling to find sexual satisfaction. Perhaps this is it… Iku ze!"

Promising High Definition videos, Maiko MILFs lured you inside for a clearly detailed look at the mature Japanese sexpot and, naturally, they delivered! Videos can be streamed in High and Low Bandwidth settings while downloads reach their highest resolution in 1080p MOVs. Photo galleries accompany all scenes and, like the videos, can be viewed online or downloaded for later viewing.

Strangely enough, Maiko MILFs holds the exact same number of scenes as Maiko Teens: 207. Updating weekly, this site is part of a three-site network that includes Maiko Teens and Maiko Creampies, both of which Maiko MILFs members have free access to peruse and enjoy as they see fit.

Cons:
While many erotica and hardcore sites have moved onwards and upwards, pushing their photo content past the 4000px mark, Maiko MILFs lags behind with its 1920px galleries that, although generally quite clear, are certainly not leaders in their field.

I don't know who or what qualifies a woman to be considered attractive in Japan, but many Maiko MILFs models are, well, lacking a certain something. Is it facial symmetry or sufficient make-up? All I know is that one in every three or four women is unlikely to have your hard-on roaring in approval.

Firefox users be warned: when viewing a Maiko MILFs scene, you may experience problems playing the online stream. Downloads remain unaffected and the issue was totally absent when viewed with Google Chrome, but in Firefox streaming video frames were missing and their position was occupied by a large Play button that, when pressed, did nothing.