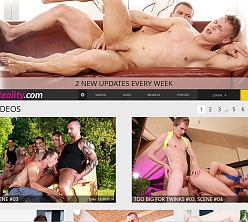 Overview:
I recall reading an interview many years ago with a teenage idol of mine, shock rocker Marilyn Manson in which he claimed that belief and little else determined reality. "If I believe I am a fluffy pink bunny," Manson said, "I am a fluffy pink bunny." While it's easy to see from photos that Manson is not actually a fluffy pink bunny, his point stands: to a large degree your outlook determines your reality. Male Reality, then, is a site offering you the chance to change the kind of world you live in, a site bringing you another perspective on life, love, sex, and friendship. Gone are your days of sexual frustration, your lonely nights with nothing but your imagination for company. Here come days off work scammed for the sole purpose of beating off to Male Reality's exclusive "reality-based" episodes, scenes that bring two men together, both of them real gay men, and see what transpires once the trousers fall to the floor. Male Reality sees women come home to find their "husbands" sucking some Latino cock or impaled by a black dude. Male Reality shows the carnality lurking behind many office doors, a twink's struggle to take a big (very big) guy, and uniformed servicemen enjoying their furloughs in a most carnal fashion. Costing $29.95-per-month, this hardcore homosexual fantasyland sees men of all styles, careers, and personalities coming together and, well, cumming together. Who wouldn't want to slice off a piece of this particular worldview?

Straight-baiting, husband-stealing, boss-fucking, and teammate-sucking scenarios abound here at Male Reality, offering a more socially risque take on gay sex than many other sites. And, best of all, they're presented in High Definition videos peaking in 1080p frames. Like the impressive videos, photo galleries hit high resolutions of 1920px online and in downloadable zips.

Cons:
Although it's not exactly a huge archive, Male Reality will soon be needing more advanced navigation tools. Without a search function or clickable keyword tags, you're basically relying on your powers of observation when deciding on a scene. Take a look at the thumbnail previews and, if things look promising, proceed, but don't expect to be guided to your new favorite scene: you've gotta find it yourself.

Loaded with European productions, Male Reality can at times feel like a pretty standard gay Euro-porn effort, one filled with apparently Eastern European pale-skinned twinks, a few hairy daddies, and some 'roided-up, heavily tattooed bulls. That's great if you're into Euro-porn; if not, it's a bit of a bummer, really. The dialogue is also heavily affected by accents: "Heh, bos. I bin verkink for you long time now… ve fook now, yis?"

Currently holding just 83 scenes and their accompanying galleries, Male Reality is far from plentiful and will leave many new members wanting more. The current update schedule sees new scenes arrive every Tuesday and Thursday, which is good to see, but arguably won't be enough to give this site the rapid growth it really needs.

The small Male Reality archive wouldn't be such a problem if not for the absence of free network access. Male Reality's content comes from Mile High Studios but access to that network is not included in Male Reality memberships, nor is access to another associated network, Next Door World. Come on, webmasters! Throw in some bonuses and you'll have a much happier fan base!

Conclusion:
Light on content with only 83 scenes online, Male Reality seems to be just getting started. Updates are hitting the site reliably on Tuesdays and Thursdays, which is good to see, and they bring visually strong content to both photo and video archives. Streaming and downloadable videos reach both 720p and 1080p HD resolutions, offering very clear, well defined images throughout. In 1920px frames, photo galleries offer similar quality online or zipped. From daddies to twinks, bulls to fuck-pigs (and beyond) the small-ish contingent of guys fucking each other senseless here at Male Reality offers some good variety, though not if you prefer American boys over Europeans. It'd be awesome to see some network connectivity thrown in here as a bonus for paying members. After all, they're getting less than 100 scenes and could use a bit more variety. Male Reality certainly has potential, though, and I'll surely be checking back in on its progress in a while. For now, though, "pretty promising" is about as congratulatory as I'm willing to get.