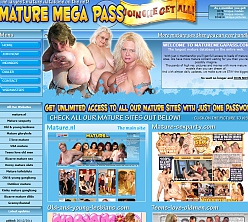 Updates arrive on the central Mature Mega Pass homepage at least once but often up to four times a day, filling up the already well-stocked online archive of 3,525 scenes, each one bringing both video and photo items your way. Some of the networks sites update on lazier schedules than others, but overall there's not only plenty of content to see here, there's also going to be a bunch of new stuff each time you log in.

Now that it's equipped with High Definition video files in both streaming and downloadable formats, Mature Mega Pass has become a leader in genuinely mature hardcore sites. The WMV downloads reach a peak of 1280x720 pixels and look quite good, if a little dull and noticeably interlaced, while streams hit 960x540 pixels and also look pretty damn decent. Hell, there are even some HD 3D movies online for those of you with 3D-capable televisions.

Videos hosted by Mature Mega Pass's sites often feature dialog that is basically unintelligible, whether spoken in English or not, knocking the HD videos off their proud position of impressiveness. Suffering from a different issue altogether are some of the photo galleries; while a selection offer high-res images, most hold frames that only reach 1024px and really can't offer anything visually powerful enough to warrant a long, hard look.

Conclusion:
The Internet has been in dire need of a handful of great mature porn networks for a while now. Only a few currently exist and none are all that impressive. Mature Mega Pass could've been the greatest of all; it has a massive archive, is update regularly and frequently, hosts some great hardcore fuck flicks, offers HD video formats, and, most importantly, doesn't try to pass 27-year-olds as MILFs, with its members instead prefering the virtual company of women in their forties, fifties, and sixties. Unfortunately, the videos look rather drab, the photo content is unimpressive in both style and quality, a number of the twenty-three networked sites appear to be completely dormant, and, costing over fifty bucks (USD) a month, Mature Mega Pass is insanely expensive, even for a network this large. Throw in some pretty damn unappealing models - I'm sure it's not just me; if you can honestly say this network is populated by babes, you'd probably lust after Paris Hilton's co-star in The Hottie and the Nottie: The Twilight Years, the inevitable septuagenarian sequel to the notorious bomb - and you're looking at a network that probably isn't worth half of what it costs, let alone fifty dollars!