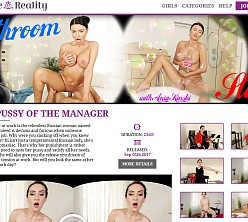 Most adult Virtual Reality sites are concerned either with letting their subscribers virtually fuck nubile teen spinners, green-skinned alien babes, or trademarked super-heroines from the latest hit movie franchise. Mature Reality, on the other hand, wants to let your MILF-fucking fantasies run absolutely wild, offering its members exclusive 3D POV-shot Virtual Reality smut only starring mature, seasoned professional sex workers. A young site about not-so-young women, Mature Reality has some growing to do but is already offering something quite unique.

Mature Reality’s 3D Virtual Reality encounters offer 180-degree viewing fully controllable with your mouse movements and deliver High Definition renderings of the POV-style encounters that really shine on capable monitors. Weekly updates add another dose of up close and personal, immersive and interactive sex to Mature Reality’s offerings. Although currently quite small, the archive should grow steadily over the coming months and prove much more attractive.

Cons:
Video streams provided here only deliver trailers for the actual VR scenes themselves. This is a good way to sample what you’re committing to with each download, but it’d be great to be able to see more than three minutes of assembled, edited footage without being pushed into a full, multi-gigabyte download.

The design and layout of Mature Reality is fairly smooth but could do with some massaging. The archive isn’t exactly huge, but as it does grow larger a more detailed and expansive Category listing would help keep your browsing on track. Speaking of Mature Reality’s size, it’s quite expensive for a site holding fewer than 30 scenes (at writing); a discount deal would be great to see here.

When viewing the photo content online (as you’re only given the option to do) most images are labelled “medium” with no small or large versions apparently available. It’d be great to see not just multiple sizes appear online soon but also zipped photo galleries ready for downloading. Mature Reality clearly undervalues its strong photo content and needs to provide a bit more for photo fans.