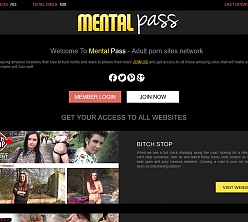 Overview:
Arousal, it can rightfully be claimed, is at least half a product of the conscious mind as it is the unthinking, reactionary, reflexive mind. Regardless of the specifics of the psychic patterns responsible for your roaring boners, sexuality is largely a mental arrangement. Mental Pass aims tor reflect that by spreading its seed across the European continent and producing thrilling sex adventures in a variety of niches and notable arenas. Mental Pass opens up a digital doorway to nine exclusive websites and their original hardcore productions, and with each site detailing a different niche interest, there’s enough variety here to keep most porn fans well fed for months on end. Promising access to Bitch Stop, Amateur Sex Teens, Czech GFs, CZasting, Gyno Violations, Lesbian Pickups, and a trio of all-Czech Virtual Reality sites, Mental Pass seems a bargain at its monthly membership price of $24.95, but can this elaborately conceived network deliver on its myriad promises? Or will Mental Pass simply drive you to the loony bin after weeks and weeks of frustration and disappointment. Tag long, fellas, ‘cause we’re about to find out!

A roster of Europe’s finest and most fan-fucking-tastic performers sits at Mental Pass and includes Billie Star, Therese Bizarre, Crystal Swift, Jessica Red, Belle Claire, Patty Michova, Arwen Gold, and Angel Wicky among many others. With the inclusion of Casting and Fetish videos, viewers will learn more about each woman than if only the VR sex was included. Non-VR content also showcases the models well.

Shot in 4K Ultra-HD formats and delivered here in peak 1920p VR videos at 60 FPS, Mental Pass is pushing the limits of its tech savviness just as it is its sexual adventures. With three global servers providing easier, faster access to files for Euro and US members, and multiple streaming and downloading formats on hand, as well as some tasty photo galleries reaching 4608px online and zipped, Mental Pass has most viewing needs covered.

Three days of every week, members find a new update landing on the Mental Pass homepage hub. Although only some network sites continue to active produce content, the regular and frequent updates to Mental Pass are encouraging. The standing archive is also quite satisfying, too, with more than 1000 scenes online and waiting for your ogling interest.

Cons:
For a nine-site network, Mental Pass hasn’t been especially well designed. Navigation can be a little tricky, your path not always clear before you start down a given direction, and there’s little-to-no information given on the performers, leaving you wanting more personality from Mental’s offerings.

Not only are a number of Mental Pass sites no longer adding new content, the content they do share looks and feels quite a few years old. Color is less vibrant, resolutions are not as high, and the crisp detail of more recent efforts is notably missing. A few sites even look to be more than ten years old!

Conclusion:
Mental Pass seems to have something of a split personality. On one hand members are treated to the latest Virtual Reality Euro-hardcore content, but no the other they’re left with an archive of dated smut from no-longer-active sites and studios. The VR content will no doubt keep new members flocking to Mental Pass for a closer look but that material won’t be enough to keep anyone around except big-time VR fanatics. Those digging into the rest of the network will be disappointed to find non-updating sites, content that clearly hasn’t aged well, and a lack of information on both the AV material and the models starring within. Mental Pass really seems like an extra support and bonus content system for CzechVR subscribers and unless you’re at least a mild VR fan, you won’t find a whole lot worthy of the contents of your wallet.