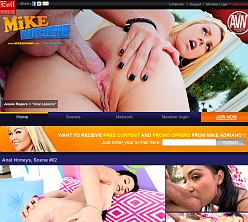 Overview:
Following the path set by devoted ass-men John Stagliano, Nacho Vidal, and Manuel Ferrara, Mike Adriano could easily have parlayed his considerable genitalia and videography acumen into a porn directing career without much trouble; in fact, that's what he did. Thing is, nobody knew, in the earliest stages of Adriano's career, that this quiet, handsome guy would soon be pounding porn's most desirable asses and mouths in an immediately recognizable style all his own to much acclaim and remarkable popularity. Mike Adriano is one of a new breed of pornographers for whom simple third-person camera angles and strong (if plain) sex just doesn't cut the proverbial mustard. Instead, Adriano adopts a POV style of shooting that places his viewers the hot seat, giving them extraordinarily intimate visual access to the inner workings of porn's endless line of stunningly sexy women. With his own self-titled Evil Angel-affiliated site pumping out the hardcore ass-fucking, deep-throating, and exploratory intercourse this director/producer/performer can produce, Mike Adriano already seems on top of the world. Where will he go from here?

Pros:
Mike Adriano is one of porn's most recognizable directors and not because he's continually mugging for the camera like some guys. Shooting his scenes in a close-up style that leaves the general framing of sex out of the equation to deliver only the most intense, explicit shots, Mike's something of a trailblazer and is certainly a somewhat pedantic pervert.

Porn's brightest girls seem to be lining up around the block to work with Adriano, and you'll find such babes as Melina Mason, Skin Diamond, Tara Lynn Foxx, Jayden Lee, and Jessie Volt opening their rear passages for Mike's dick and camera, both. Nobody shoots like Adriano and his camera flatters most of his guests, and it's especially nice to see black women shot in a well-lit, glowingly beautiful way.

Adriano's style might be incredibly detailed regardless of the video resolution, but the videos posted here are nevertheless delivered in 720p and 1080p High Definition containers that show an abundance of detail; almost too much, if you can believe that! Photos are also impressive and reach 1280x1920px in online galleries.

There's often a significant discrepancy between the size of one photo gallery and the next to arrive; some galleries hold more than 400 images while others stall at 30. Downloadable zips are not provided. Also, many galleries focus heavily on the striptease introduction and leave the actual sex to the videos.

The DVDs released here on Adriano's site are not entirely exclusive. Not only is there the retail release to compete with, but other video sites (Videobox for one) license most of Adriano's DVDs and, on occasion, they can be found elsewhere before they're added here.

Conclusion:
With his indomitably explicit shooting style now firmly established at the cutting edge of HD porn, Mike Adriano is simply continuing to build his empire. His official site, while not perfect, doesn't do his reputation any harm. The High Definition videos and high-res photos perfectly capture every minuscule part of his gorgeous co-stars' bodies, plundering their assholes and tapping their tonsils with messy glee that'll have you reaching for your own latex gloves. Adriano's intense style will be absolutely too much for some viewers, but those keen on exploring every inch of, say, Jessie Rogers's body will rejoice. Adriano is an acquired taste, yes, but if you dig his style you'll marvel at his site.