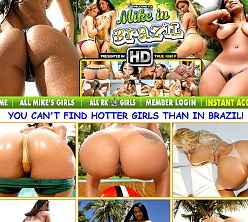 When Mike Somethingorother first launched his adult website, Mike's Apartment, every guy who visited its tour pages or signed up for a membership started dreaming of setting himself up with an Amsterdam apartment and watching the babes waltz through the door, willing to fuck for somewhere to stay. Now that Mike has set up shop in Rio de Janeiro, forsaking the sophisticated sexual liberalism of European chicks for the more immediate and (dare I say) slutty Brazilian hotties, most of whom have amply packed asses and beautiful tanned skin, you'll be dreaming of a beachside bungalow all your own before you watch even half of the nearly 350 hardcore pussy and ass-fucking scenes this exclusive, original Reality Kings website offers.

Overview:
There are some guys with whom it's impossible to identify. Take Mike of Reality Kings website, Mike's Apartment, for example. Here's a dude who had it all: an awesome apartment in the heart of Amsterdam, enough financial stability to rent his spare room out for free, and sufficient charm to convince female would-be renters to strip down to their bare essentials and have sex (often with him) on camera. Any one of us would kill to be in Mike's position, but this guy still wasn't satisfied. Packing his bags and flying down to Brazil, Mike set himself up once again as the ultimate ladies man. Forgoing the beautiful European girls he was used to and instead focusing his attention on tapping the endless parade of delectable asses Rio has to offer, Mike's second online venture, Mike in Brazil, offers some fantastic amateur hardcore that proves Brazilian babes are just as fantastic in the sack as the best the EU can offer. For $24.95 a month, Mike shows his members what a wild time they too could have if they were man enough to make it happen; sun, sand, surf, sucking the nipples of some phat-assed tanned blonde while she tugs at your boardshorts... ain't it the life?

Pros:
One of the most important aspects to a Mike in Brazil membership is the network access it gives to all members. Reality Kings is a world famous adult network comprising an incredible 39 websites, each focusing on a different niche or genre of adult entertainment. Mike's other site, Mike's Apartment, made its home here many years ago and now Mike in Brazil does, too.

On this, his "never ending booty vacation," Mike is solely concerned with finding hot South American babes with jam-packed asses who are down to fuck on camera. These amateur girls sport smoking hot bodies and an undeniable enthusiasm for giving and receiving sexual pleasure; they're also quite willing to have their rear passages pounded by Mike and his bros, both indoors and out.

Presented in High Definition video formats, Mike in Brazil's scenes look great. Resolutions peak at 1280x720 and 1920x1080 pixels, offering dynamic, clear views of the scenes whether shot in a hotel suite or in a secluded area of a sun-swept beach. There are multiple formats on hand to download or stream, catering to all viewing platforms.

Cons:
Those of you who are considering but are not yet sold on joining Mike and his crew of tanned babes should be wary of the trial membership on offer here and across the Reality Kings network. While it initially seems like a good deal - $1 for two days of access - the trial not only recurs at the insanely expensive rate of $39.95 a month, but it only offers limited browsing privileges and doesn't allow any content viewing.

Like the photos on all Reality Kings websites, those hosted on Mike in Brazil linger at unimpressive resolutions of 900px. These image sizes were adequate a few years ago, but now, when compared to the 1600, 2000, and 3000px offerings from other sites, they fall quite short.

Older scenes from Mike in Brazil's archive suffer not only from lower video and photo resolutions the give substantially less vibrant and exciting images, but also from starring women who are, well, let's just say they were amateurs then and there's no reason to expect they've embarked on a successful modeling career in the interim.

The members area can be quite cluttered and crowded thanks to the presence of copious advertising buttons, banners, and animated graphics that distract you from your otherwise enjoyable browsing. While some of the ads refer to special Reality Kings deals and offers, most push you towards signing up to a third-party website or network unrelated to Mike in Brazil.

Conclusion:
When Mike first ditched his Amsterdam apartment and took his operation to Brazil, it wouldn't have been unfair to assume his work would suffer. Instead of a less impressive retread of his European bait-and-mount approach, Mike in Brazil sees this infinitely enviable camera-wielding pussy-hound taking a more aggressive approach and picking up girls on the streets, beaches, and clubs of Rio, Salvador, and Sao Paulo. Convincing them to disrobe, pose, and mount his or a pal's stiff one, Mike captures these girls doing what they do best: fucking their brains out. The HD videos present all the action very well in dynamic, clear frames. Photo content, however, could definitely use a resolution boost in the near future. Whether you're a devoted Latina-lover or just someone looking for an unfathomably pimpin' lifestyle to emulate, Mike in Brazil shows you how fucking fantastic living in a foreign country, one with a huge population of eagerly promiscuous plump-bottomed babes, can be.