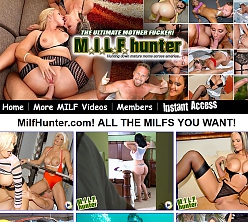 The women, for their part, provide some devastatingly hot pussy, leaving our guys reeling from the encounter and swearing off 18, 19, 20-year-olds from here on out. The women include busty blondes Angel Allwood, Alena Croft, and Nina Elle, sultry brunettes Naomi Rose, Lesley Zen, and Helena Price, along with many other stellar mature ladies.