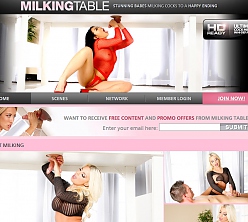 Overview:
We've all had sexual problems at one point or another. Whether it's performance issues, lack of libido, or a seeming inability to find another interested party, human sexuality is a fickle thing and can require some maintenance. Those men lucky enough to be cast in Milking Table productions, however, are attended to by women whose primary concern is helping their clients relax and find their individual sexual wavelength on which to operate and indeed thrive. How they do this is simple: first there's a conversation about his problems or frustrations, following this is a thorough full-body massage that ends with a rather unique release. Turning onto his stomach, the guy complies with orders and puts his now-erect cock through a hole in the massage table, a hole that introduces his hard-on to the lips, tongue, fingers and hands of his masseur. The women working their appointed dicks into explosive cumming machines aren't shy, impersonal professional therapists. They're pornstar babes of the highest order and they're here at Milking Table to worship, treat, and swallow dick after dick after dick until nobody, client or "therapist" or home viewer, is left wanting. Milking Table is the newest addition to Fantasy Massage's (formerly Nuru Network) growing legion of massage-porn sites, costs $29.95-per-month to access, and promises to have you fighting (and fucking) fit and back to full sexual potency in no time.

Pros:
Cock worship usually takes the form of a surprised reaction to pants removal or a few scattered exclamations "It's so fucking huge!" during sex, but here at Milking Table, the entire premise revolves around an adoration, even obsession with hard cocks. Frustrated guys turn up for sex and massage therapy only to find themselves in the mouths of their therapists, who then turn the guys over, slip their dick through a hole and milk it dry.

High Definition video formats are offered for all Milking Table scenes, peaking at 1080p but also offering 720p, 540p, 480p and other resolutions. Like videos, photos can be viewed online and offline (in downloadable zips). While image resolution isn't exactly high, both pics and vids present the stroking and sucking action clearly enough and with plenty of lusty shots of slippery-handed crouching cum-sluts working that pole.

Weekly updates will keep this fairly new site growing steadily and although there's not a ton of content online here yet, free access to four other sites on the Fantasy Massage - Nuru Massage, Soapy Massage, All Girl Massage, and Massage Parlor - is available to all Milking Table members, adding over 1,000 extra scenes to their plate. Mr. Pink has something extra for you, too: a discounted access fee of only $14.95!

Cons:
A fairly new site that only launched three months ago, Milking Table hasn't yet assembled a large enough content catalog to ensure satisfaction. Holding only 51 scenes and 54 galleries at writing, Milking Table will take another year to hit 100 scenes, the benchmark for viewer satisfaction and fulfillment, and a strong marker of value for money.

While downloadable videos look very nice indeed in their 720p and 1080p High Definition frames, the streams are not so impressive. Limited to 540p peak resolutions, streaming videos don't look terrible by any means, but they're a visible step down if only a slight one. It'd be great to see at least 720p streams in the future.