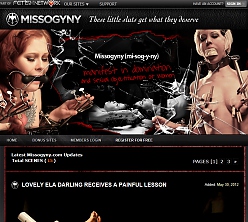 Combining the words "miss" and "misogyny", Missogyny isn't just the name of a BDSM and kink site, it's also the name of said site's dungeon master. With her flaming red hair, finely formed leather-clad physique, and an impressively commanding voice, Missogyny (the women) turns the tables on traditional notions of the sexual objectification of women by involving herself directly in the domination process, administering punishments of every variety as her gaggle of submissive slaves, which include some notable alt.porn performers, bend to the strength of her will. As self-confessed subs themselves, though, they not-so-secretly love every second of this brand new, HD-equipped, Fetish Network-hosted female domination site. And given you're about to read a review of a site called Missogyny, you likely will too.

Equipped not just with intimidating bondage restraints and apparatus, but with HD video cameras too, Missogyny and her crew manage to produce some breathtaking visuals. Delivered in four sizes (including one fit for mobile devices) the best of which hits an impressive 1920x1080 pixel resolution, Missogyny's video content looks very good indeed. Screencap galleries are provided in lieu of photo content, and boy do these screencaps look nice!

Every scene posted to Missogyny's homepage comes with a detailed description of its content. Performers also introduce their scenes with a short spiel or interview in which they outline their expectations. Thankfully, Missogyny doesn't treat them lightly and straps them into torture devices and restraints before using training tools (finger screws, a cattle prod, clothes pegs, ball gags etc.) to force her visitors into complete submission.

Cons:
Holding just 15 scenes, Missogyny is the second-smallest site hosted by Fetish Network. Updates have, in the past, been a little irregular but now that they've evened out to a weekly schedule we should see the site grow to a good size in, oh, about a year.

As mentioned earlier, there are a number of popular, adventurous, and uniquely beautiful women appearing in Missogyny's scenes, as well as elsewhere on Fetish Network. Unfortunately, neither the site nor the network provide members with a model index. Want to find more Cherry Torn scenes? Start digging, son!

Traipsing around Fetish Network could teach you quite a lot about what tickles the fancy of a wide variety of fetish-friendly individuals; it'll also show the network's reliance on licensed content, much of it four or five or even ten years old, to fill up the archives. Missogyny and some other sites are entirely exclusive, yes, but the network as a whole is not.