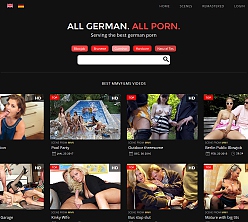 Home to a busy archive loaded with plenty of High Definition video content, MMV Films now offers video resolutions of 720p and 1080p in streams and downloadable MP4 files that generally look quite crisp and detailed, even when they’re obviously remastered from older sources. Photo galleries tend to be a bit less thrilling here, turning viewers back to the video selections to stream or download their desired encounter, be it straightforward or wildly kinky.

Cons:
The last updates to land at any of the four MMV Films sub-sites arrived well over a year ago. Thankfully, mainline MMV content is still arriving at a steady pace and ensuring members don’t go too long without something fresh and feisty to enjoy. Still, those hoping to catch the latest Kelly Trump adventure are shit outta luck and looking back to 2015.

With much of MMV Films’s archive drawn from movies released pre-2014, it’s not surprising to find many, many standard-def videos online here and not the brilliant High Definition formats seen elsewhere both at MMV and on other Stiffia sites. it’s clear MMV’s current shooting schedule isn’t the busiest of the studio’s lifespan and it’d be great to see more fresh content hit the MMV Films.

Photo galleries are often low-res and hold few shots, which will surely disappoint fans of still galleries. Any gallery providing fewer than 12 images is undeniably a wasted opportunity. Do photo shoots even exist to correspond to MMV movies? Why not issue screen cap galleries, if for no other reason than to provide a decent scene previewing option?