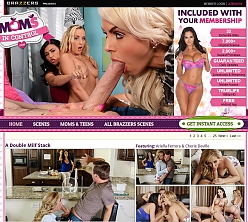 Up-and-coming starlets Blair Summers, Cassidy Klein, Jillian Janson, and Janice Griffith submit to their foxy step-moms (or boyfriend's step-mom) Eva Notty, Isis Love, Bianca Breeze, Dana Vespoli, and the interminably filthy-mouthed Diamond Jackson. The guys, for their part, include some of porn's newest and stiffest studs. Thankfully, when it comes to the non-sexual performances, most women and men do a reasonable job of acting their part.

While most performers do a good job playing outraged then aroused MILFs who decide to teach their young step-daughters and step-sons a thing or ten about sexual excellence, there are a few scenes that play so ridiculously false that it's a chore to sit through any stilted dialog and awkward line readings; just get to the sex already!