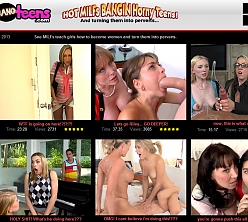 Pros:
Not only does Moms Bang Teens give us the chance to watch porn's sultriest MILFs and sexiest newcomers pair up to work one lucky guy over, it sees them really dress and play the part! The elder women - Nina Elle, Aaliyah Love, India Summer, Ariella Ferrera et al - wear pearls or business attire and are verbally and physically dominant, while the teens - Dillion Harper, Alex Tanner, Janice Griffith, Marsha May and more - play their parts just as perfectly.

Streaming at 720p and downloading in colorful, richly detailed 1080p resolutions, Moms Bang Teens captures its irresistible female cast very well indeed. New content arrives here on a varying schedule, but you do see consecutive weekly updates every now and then. And, with its 100th scene now on the horizon, Moms Bang Teens is growing quite well.

Cons:
With updates only arriving about twice-a-month - with the occasional exception, a few weeks of regular weekly updates - Moms Bang Teens is growing fairly steadily but could be much more plentiful. This isn't just my idea, but the actual members of Moms Bang Teens. Reading comments on recent updates, many viewers say they wish this was the most active Reality Kings site.

Moms Bang Teens' video downloads might come in tasty 1080p frames but streams only reach 720p. Compared to a few other step-mom sites that now offer 1080p, even 4K online video viewing, Moms Bang Teens is lagging a little behind. Photos, too, could use an upgrade from their current 1800px peak resolution. Imagine how hot they'd be at 3000px!

Lately I've been regaling some friends with plot lines from step-cest movies, Moms Bang Teens episodes included, and the reaction from any female present is always to burst out laughing at how absurdly unrealistic it all is. They've got a point. Reality Kings doesn't really deal in realism much anymore, instead opting for fantasies.

Hunting around for a scene that ticks all your personal boxes is pretty easy here on the Reality Kings network, but Moms Bang Teens poses an exception. Scene options are displayed with attractive thumbnails, upload dates, and scene titles, but only one of the featured female model's names. And it's not always the titular (almost-)middle-aged vixen, either. You're forced to select a scene to see both performers' names.