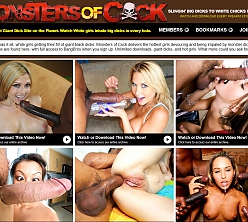 As far as monsters go, the particular Bang Bros can't be said to be too harmful. After all, their encounters rarely leave without a blissful smile plastered across their faces, their bodies throbbing from the intense pleasure only a big, black dick can bring. (Hey, there's some racial tension and fantasy play in there, too, and that definitely helps!) Monsters of Cock sees 1080p High Definition renderings of some truly amazing feats of vaginal flexibility and African American male virility. Sure, updates are a bit erratic and some scenes err too far towards the absurd, but in the end it's Monsters of Cock that puts the "Bang" in Bang Bros.

Overview:
Godzilla destroyed a good chunk of Tokyo, Frankenstein's Monster destroyed our previously held notions of personality and humanity, but the gigantic schlongs seen at Bang Bros site Monsters of Cock are different beasts altogether, beasts not intent on destruction per se, but on bringing intense, overwhelming pleasure to the pussies of today's hottest pornstar legends and eager wannabe AVN-winers. Size-queens galore line up at Bang Bros HQ to meet the biggest swinging dicks in the adult industry, grabbing the cocks and comparing them to their own body parts. Bigger than their forearm, sometimes even their thigh, the dicks offered to Monsters of Cock's drooling, eager babes take one of two paths: they start to worry they can't accommodate such a penis and insist the guy proceeds slowly and with caution or they throw their legs open, fall flat on their back, and beg to be slammed as deep and hard as possible. Both types of scenes make for great viewing, especially with all the glorious 1080p HD visions of stretched-out cunts and face-pasting penile eruptions on display, and there's more than enough at Monsters of Cock to keep your eyes glued to your computer screen for weeks, months, perhaps even eons.

Pros:
With some of porn's biggest dicks poised and ready to be slowly worked into an orgasmic frenzy, Monsters of Cock sure shows its visiting ladies a damn good time. Most of the women gleefully wrap their lips around the BBC in front of them, getting it nice and wet and ready for riding. The guys slinging their meat here include Isiah Maxwell, Sean Michaels, Mo Johnson, and Lex Steele himself.

All Monsters of Cock members get a whole lot more than 600 BBC-fucking scenes to enjoy. The entire Bang Bros network, all 53 websites, including Ass Parade, Bang POV, Glory Hole Loads, and that most notorious mobile den of depravity, the Bang Bus, for a grand total of more than 7,800 scenes. Membership is now discounted and available at the irresistible rate of $14.95-a-month!

Cons:
Advertising graphics cannot be avoided at Bang Bros, littering most every page on the network, including those of Monsters of Cock. Most ads are pushing other Bang Bros sites on you, whether they're part of the official Bang Bros network roster or related networks and sites. It can quickly get to the point where you're not sure which links will take you to content and which will dump you on another site's sign-up page.

Starring an almost entirely African American male cast of cocksmen, Monsters of Cock advertises itself as "The world's largest big black cock website." Inside, though, eagle-eyed viewers will note the presence of white dicks belonging to J Mac and a few other white dudes. They're always playing second fiddle to the BBCs but may still annoy those here for BBCs only.

Some girls struggle so much it seems stupid to keep going. If you're not able to take the likes of Shane Diesel or Mandingo, ladies, perhaps shoot for a different site. Directors, when it seems your performer is really struggling, cut your losses and rehire her for an easier scene. Nothing is as immediate a turn-off as obvious displeasure.

Conclusion:
Like all the currently updating Bang Bros sites, Monsters of Cock is now outfitted with 1080p High Definition videos that stream and download cleanly and without issue. Photos now reach 2000px in downloadable zips and online galleries that come complete with slideshow functionality. While all the visual elements are of course important, nothing is more important than the sex they put on display. In that department, Monsters of Cock rarely falters and almost never fails. (A few giant dicks fail to produce giant loads, or even visible ones.) The women, bless them, usually throw themselves at the intimidating dicks with a shrug and soon find out they can handle them a lot better than expected. Sara Luvv, Chanel Preston, London Keyes, Romi Rain, and newbie Lola Foxx are all fairly recent visitors who've proven to be great matches for the likes of Lex Steele and Prince Yahshua. Hell, some of these guys even score an anal jackpot! Oh, Bang Bros, you so rarely disappoint - definitely not with Monsters of Cock.