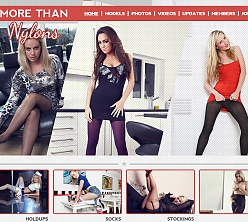 Overview:
You've fetishized the slinky, sleek effect of nylon hosiery upon the slender female leg and foot for years, but were you aware that your fondness for tight, sheer garmentry can be expanded well beyond those made of nylon? If you're disinclined to indulge in the somewhat unknown, More Than Nylons has the cure for your reluctance and offers an exclusive collection of original hosiery-fetishizing softcore pornography, both videos and photos, with which it hopes you'll fully realize the potential of these body-conforming items of leg wear. Produced in and operating out of the United Kingdom, More Than Nylons is home to a bevy of delectable British women whose fondness for dressing up in knee-high socks, stockings, tights, and what the Brits have dubbed "holdups" ("thigh-highs" in the States) is showcased alongside their exhibitionist sexual impulses. You'll see them slowly peel off stockings, lingering at their feet for maximum erotic potential. You'll marvel at the way the sun reflects off their thighs as they pose beneath an uncommonly sunny British sky. You'll even be privy to some far more risque scenes that see these beauties pleasure themselves while wearing striped knee-high socks reminiscent of high school athletic uniforms. More Than Nylons doesn't make many promises on its tour pages, instead allowing its imagery to speak for itself. In order to fully comprehend the extent of this particular fetish, you'll have to sign up for a membership, which costs either $19.99 and $29.99 depending on whether you expect to keep coming back month-after-month. Or, to play it safe, you could follow along as I do the exploring for you!

Pros:
Hosting an exclusive collection of original softcore galleries and videos, More Than Nylons celebrates all kinds of seductive leg-coverings: stockings, tights, socks, and holdups (thigh-highs). The models pose in alluring bodily contortions that amplify their already enticing bodies and draw you in for a closer look before peeling said undergarments off and showing the full extent of their exhibitionism. "Hooray for Hosiery" indeed!

British women often get a bad rap - if you're not Kate Moss or Kelly Brook, you're "fugly" - but the ladies of More Than Nylons make it clear the UK has plenty of stunners among its citizenry. From athletic girls with tight, fit bodies and compact breasts to curvier babes who wrap themselves tightly in lingerie and hosiery before allowing their ample breasts and thick thighs to breathe. Best of all, these aren't models you've seen a hundred times already.

Frequent updates see three or four new galleries added to the archive each week (usually along with one video). The current More Than Nylons archive isn't exactly large, but it's definitely on its way to becoming substantial.

Cons:
While this content has been originally produced for this site and won't be found elsewhere, it's not all that exceptionally different to what many other lingerie and hosiery fetishism sites have to off, models aside.

Navigation options are quite basic here at More Than Nylons, only giving you four category options: socks, stockings, holdups, and tights. Beyond that and a model index that doesn't offer any substantial biographical or profile information, you're on your own.

Video updates were arriving on a weekly schedule, but that could be changing. The most recent video was added almost two weeks prior to the writing of this review. While that might not actually signal more than a brief lapse in the flow of content, even that is a rather disconcerting proposition. The increasingly common presence of behind-the-scenes updates is also a little troubling. Could More Than Nylons in fact be near its end?