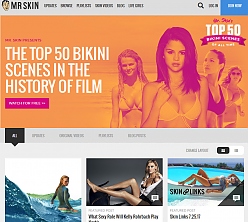 Mr. Skin has been trawling the VHS, Hi-8, 35mm, and DVD archives of the world’s largest (and smallest) movie, TV, and music video studios since 1999, noting and capturing the most revealing shots and clips of our favourite celebrity babes for our personal, private enjoyment. Now, nearly two decades into his crusade, Mr. Skin is even bigger and bolder than ever, providing fans with curated playlists, custom videos, and a gigantic archive of nearly every nude scene or scandalous sexy shot ever committed to celluloid (or SD card). All praise to Mr. Skin!

Overview:
You know his name and no doubt you know his URL, so how come you haven’t checked in with your ol’ celebrity porno entrepreneur, Mr. Skin in however long it’s been since you gawked at the kind of celeb-spotting videos even TMZ won’t show uncensored? With the recent explosion of graphic nudity and sexuality on our TV screens, not to mention the ever-reliable world of “art” cinema and foreign flicks, it’s quite obvious that Mr. Skin has plenty of bare-assed content to carefully sort through and send to your desktop, laptop, and mobile screens. And, damn, he sure as shit does! From Israeli goddess Gal Gadot to hot-blooded American babe Amber Heard to Australia’s own Isla Fisher, the range and reach of Mr. Skin is beyond compare. If she’s appeared naked, partially nude, or just skimpily, sexily clothed in a TV show, movie, commercial, or music video, she’ll be featured in Mr. Skin’s epic database of ‘no context’ celebrity erotica. Kitted out with a very healthy blog, original Skin Videos, custom Playlists, and many other kinds of supplemental content, Mr. Skin’s devotion to famous female figures knows no limit. Well, there’s a price to be paid, of course, but priced as low as $5-a-month, Mr. Skin is even more affordable than a trip to your local cineplex. Fuck the traditional popcorn-and-soda combo. Head inside Mr. Skin and pick up a lube-and-tissue set instead.

Pros:
From former soap stars resorting to action flicks with copious full frontal nudity to respected and adored pop stars shaking their asses in a music video to videos that go behind-the-scenes of a racy GQ photo shoot, there’s quite a wide range of content to be found at Mr. Skin. Stripteases, sex scenes both super-soft and seriously graphic, heavy petting and passionate kissing scenes, and modelling shoots with ample skin on display are all found here.

Home to both photo galleries and video clips of various sizes and lengths, Mr. Skin is somewhat limited in its image quality by the quality of the source material and format. At its best, though, the site offers up 720p High Definition video streams and downloads, and still pics peaking around 2000px. Much of the content is ripped straight from an impressive HD source and delivers powerful imagery.

Mr. Skin is far more than a loose assortment of titty shots from TV, it’s also a thriving pop-culture phenomenon outfitted with a huge blog archive, thematically linked Best Of compilations focusing on bikinis, bathing, lesbian makeout sessions, and much more, as well as curated Playlists, and reviews of a particular celebrity babe’s entire career undressing on camera. The supplemental content available here is in huge supply.

How much would you expect to fork out each month for access to this almost overwhelming tsunami of celebrity skin? Cutting its usual single-month price from $15 to just $5, Mr. Skin clearly is less interested in hoarding as much digital cash as possible and more interested in reaching a wider audience than ever before - take advantage while you can!

When you’re eagerly gobbling up shots of the exposed nipples, barely concealed bushes, and perky asses of your favorite actresses, the inclusion of so many “skimpy” and “sexy” outfits that are no more revealing than a bikini can start to get on your nerves. It’s not that this content isn’t hot, it’s just not exceptionally interesting, rare, or appealing when ScarJo’s mammaries are sitting there waiting for your full powers of observation to kick in.

Mr. Skin’s use of language won’t suit all viewers and, while that might seem like a fairly small problem to have, it’s so ever-present that it’ll surely annoy some to a large degree. “With a Body of Work this spectacular, there’s no denying that Anne Hath-a-way of driving us wild!” is one example among tens of thousands.

With a long history of providing online adults with a shortcut to the most memorable parts of a given show or movie, Mr. Skin is obviously going to be stuck with lots of Standard Definition content that pales in quality compared to recently produced 4K-sourced material. Upgrades to many scenes and clips are forthcoming (or should be) but the process seems a bit slow at the moment.

Conclusion:
Everybody knows and loves Mr. Skin at this point, his constant drive to commemorate celebrity nudity now a well known pop-culture phenomenon. With streaming services placing full episodes of raunchy nudity-laden TV shows at our fingertips, though, does Mr. Skin still provide a truly valuable service? Thanks largely to the abundance of custom content created in-house to best showcase the most appealing and revealing nudity of the year, decade, genre, or career, the Mr. Skin brand is still growing and reaching deeper into our virtual spank banks. With more and more content available in HD resolutions from HD and UHD sources, image quality is better than ever and allows more revealing detail. Shows like Girls and Game of Thrones also fail to hurt Mr. Skin’s M.O., supplying the guru of famous gash with a steady supply of borderline-smutty content to peddle. Priced low but always aiming high, Mr. Skin is still the most obvious choice of provider for those of us who, mainstream hardcore porn be damned, still find ourselves most excited by the impression of an erect nipple bra-less beneath a t-shirt or the glimpse of pubic hair that appears as a character exits a bathtub. For those of us with our minds in the gutter and our eyes on the stars, Mr. Skin is a perennial favorite and an absolute must-see.