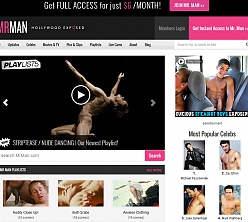 Many a time you've found yourself watching a movie and remarking to nobody in particular "Gee, he's alright. Wouldn't mind dragging him back to bed. Wonder what his cock's like?" Well, now you can find out! Mr. Man is the all-male version of the legendary purveyor celebrity nudes and it's filled with screen captures, video clips, and photoshoots showing just how hunk-a-riffic the marvelous men of Hollywood (and Bollywood and beyond) are in their rawest, most natural states. From Oscar winners to talk show hosts to just-graduated teen stars taking a more mature career path, it seems every notable guy in show business is dropping trou here at Mr. Man.

Overview:
For more than a decade, Mr. Skin has been selecting the finest moments of female celebrity nudity sourced from TV shows, movies, even insurance commercials to offer a comprehensive archive of Hollywood's hottest shedding their outer layers and showing some skin. And, as a result, the growing legion of devoted Mr. Skin fanatics is both happy and hard with this influx of celebrity nudes. Now, it's the ladies' turn! (Well, anyone into handsome, studly men, really.) Mr. Man is the male-worshipping version of Mr. Skin, collecting and presenting the tastiest clips and caps from all kinds of man-filled media. Wanna see Michael Fassbender's dick swinging across the set of Shame? How about the rippled abs of a young Mr. Bradley Pitt as he poses for a long-buried beefcake shoot? It'll cost you, though. Hand over $20-per-month and you'll be facing every chiseled chest (both hairy and smooth), muscular man-ass, bulging biceps, and pair of hunky bedroom eyes you've ever wanted to pull down from the big screen. Oh, and there's a very healthy number of explicit cock shots, too, so you can see how you or your partner measure up against, say, William H. Macy. Yes, even Fargo's bumbling car salesman Jerry Lundegaard can be seen naked at Mr. Man, the most comprehensive male celebrity nudity site in existence!

Pros:
Got a favorite actor, TV presenter, or celebrity from another medium? Chances are he's to be seen here in the buff. Well, shirtless, at least. Globally adored and admired fellas like Michael Fassbender, Jake Gyllenhaal, Tom Hardy, Ryan Gosling, and even lil' Joseph Gordon-Levitt get their kits off here and prove that talent isn't the only thing that helped them reach the top.

In screencap galleries and video clips pulled from broadcasts and home video releases, Mr. Man serves up imagery in good-looking packages. When available, content has been sourced from HD streams and Blu-Ray discs and can be viewed in 720p and 1080p video resolutions and in similarly sized screencap frames. Quality varies according to the source, but Mr. Man has high standards and usually upholds them.

Regular gallery and video clip updates arrive on a consistent daily basis, adding even more saucy celeb tidbits to the tens of thousands already sitting here and awaiting your attention. Mr. Man also provides curated playlists focusing on specific skin shots or scenarios - say, butt grabs or "backsacks" - which give a great overview of a handful of men in one easy package.

Along with the main archive nude and sexy shots of male celebrities, Mr. Man also allows its members access to a collection of 26 gay hardcore movies from Falcon Studios, Muscle Bound, and Raging Stallion, among others. All this for just $20-a-month? Oh, Mr. Man, I could kiss you!

Cons:
If you came here for celebrity cocks, you'll be disappointed that most men are featured in "sexy" images, not real nudes. Sure, it's nice to have some clear shots of the chiseled physiques of these household names and rising stars, but a dick shot is worth more than any Oscar or Golden Globe. This isn't Mr. Man's fault, of course, but disappointing all the same.

It's great to find Blu-Ray-sourced videos and high-res images of 720p and 1080p resolutions making their way onto Mr. Man, but unfortunately there's still a huge amount of non-HD content that, quite frankly, often looks pretty poor. Hey, you can't exactly blame Mr. Man, but it does hamper your ability to see the juicy asses or swinging dicks of your on-screen idols.

There's no reason you couldn't cut Mr. Man out the equation and simply watch the movies and shows known to feature naked or semi-naked shots of your favorite actors. Nothing found here is at all exclusive or original; even the Mr. Man playlists are just assembled assortments of clips with a title and some commentary slapped on.

Conclusion:
Mr. Man might not be as well known as Mr. Skin - and it's certainly not as large or popular - but it's still very much a worthwhile venture for the long-standing celebrity nude showcase. Mr. Man's archive currently holds pics and vids featuring some 3,190 celebrity men. While some of them remain at least partly clothed in every image, others bare their asses in sex and showering scenes while others still ditch every stitch and show off their incredibly well-formed physiques. Mr. Man now hosts more HD content than ever before with much of it coming from the now-ubiquitous HD TV broadcasts and looking very nice here in 1080p peak video resolutions. Updates are added on an insanely productive schedule and keep members glued to their screens as the next near-nude shot of the next Ryan Gosling hit the already enormous site. You surely know what you're getting into with Mr. Man, but I'm happy to report that this off-shoot is fast becoming a great and worthy counterpart to Mr. Skin.