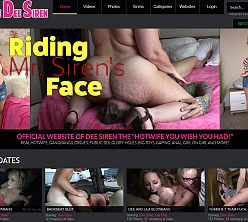 Marriage can be a wonderful union of two people willing to permanently forgo the chance of intimacy with others in favor of a single perfect partner. Marriage can also be a little looser, though, as evidenced by the outrageous sexual adventures of the Internet's premiere amateur hotwife, Dee Siren. On her official website, Mrs. Siren, this blonde hyper-hussy has her husband's permission to screw around. While she's opening up for an airtight triple-penetration from a trio of hung black strangers in a seedy hotel somewhere, hubby holds the camera and captures it all for those of us with far, far less interesting marriages.

Mrs. Siren is Dee's official site and home to a library of naturalistic scenes shot everywhere from nightclubs and private party booths to adult emporiums, glory holes, motel rooms, and suburban houses and apartments much like yours and mine. From motel-room fan-bangs to live sex shows at adventurous art galleries, Dee will pry apart her pussy lips, shove giant plastic cocks up her ass, and generally whore it up wherever she's invited.

Cons:
Updates at Mrs. Siren are erratic and unpredictable - anywhere from next day to next month - and have been for a long time. You never quite know when a new Mrs. Siren scene or gallery is due to arrive and, at times, the site can even seem dead only to appear revived a month or two later.