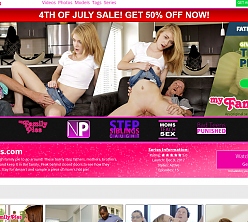 Overview:
Ah, baking! The last culinary resort of the not-so-cooking-inclined and a far too common way some women demonstrate affection for their fellas, whisking together some basic ingredients and tossing into a hot oven for an hour may fill a house with appetizing aromas and satisfied stomachs, but whether cookie or pie, there’s also a sexual overtone that needs addressing. And, boy, My Family Pies addresses this motherfucker hard! One of a number of new-ish Nubiles sites hell bent on corrupting your view of family life, My Family Pies takes the whole step-cest phenomenon to a whole new level of family-fucking insanity. Episodes take a look at reality-based scenarios in which marriage vows are tossed aside like soiled socks and young, nubile, eager step-daughters throw themselves at their big-dicked daddies, mom’s feelings be damned! Instead of pulling out like a sensible idiot, though, Pops pops inside his young step-slut on most occasions, leaving fans with a powerfully taboo image lingering in their minds. Although new and not yet fully developed, My Family Pies nevertheless offers the step-cest aficionado a solid deal: hand over $29.32 for a month of access and enjoy HD takes on some seriously taboo family lives.

Pros:
Often accompanied by their moms, who tend to remain unaware of the true extent of their daughter’s hunger for dick until it gets messy, such young spinners as Anya Olsen, Carolina Sweets, Moka Mora, Ariel McGwire, Angel Smalls, and Alex Blake seduce their step-dads, step-brothers, and even each other, eventually landing themselves a pussy full of spooge.

Conclusion:
Taking a long hard look at family relations in the year 2018 and deciding, damn, it’s time we vicariously fucked someone closer to home, My Family Pies presents a modest collection of step-cest scenarios tending to culminate with an internal creaming that adds an air of risk to the already taboo proceedings. In HD updates of 720p and 1080p resolutions, streams and downloads both, and in high-res galleries, Nubiles directors create a fairly believable family situation before fucking it up delightfully with some serious flirtation that leads to an unleashing of familial sexual tension. The featured performers often give great turns - Anya Olsen and Alex Blake being two standouts - but some scenarios can be a bit too silly to get seriously excited about. Even when it’s just the sex that’s making a scene worthwhile, My Family Pies takes things a bit further than most other step-cest ventures, sexually, narratively, and ejaculatorily, making it one of the more intriguing additions to the unbelievably popular genre.