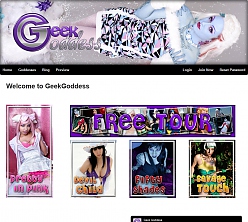 If you fancy yourself something of a comic book, anime, video game, sci-fi and fantasy fan but have a libido that your backyard bullies would never believe, you'll likely find solace in the arms of the My Geek Goddess models. Gussied up in the costumes of X-Men, Avengers, anime warriors, alien hunters, undead menaces, and even a Clockwork Orange droog (all female versions, of course), the ladies let their inner superheroines come to life in the exclusive photography of My Geek Goddess, where you're truly among the geekiest of friends.

Overview:
Ever since your picked up your very first X-Men comic you've been ogling the babiest babes ever illustrated in sequential form. Created and rendered by the legendary artists of Marvel and DC, digitized by the creators of Street Fighter and Final Fantasy, and otherwise delivered through the pop culture channels of cinema, television, and literature, gorgeous, seductive imaginary women took hold of your libido and refused to let it go, dragging your adolescence well into your twenties and thirties (and perhaps even later). "At its heart, Geek Goddess is a site run by geeks and nerds for geeks and nerds," the tour pages boast before proving the claim: "Strong with us the force is." Assuring cynical post-mainstreamed-SDCC fanboys suspicious of attractive women claiming a place in the geekdom of these models' genuinely nerdy interests, My Geek Goddess lets them (the models) chose their favorite characters and cosplay as them in shoots far more risque and erotic than anything you'll see on a convention floor - and the characters they pick just might be a bit too obscure for some viewers, too! Costing only $9.95 per month to access, My Geek Goddess promises to be a uniquely arousing cosplay experience.

Pros:
The costumes worn by the various My Geek Goddess are beautifully created and faithful to the characters that inspired them. From Jean Grey, Psylocke, Rogue, and Jubilee of the X-Men and Batman's supporting cast of Harley Quinn and Poison Ivy, video game babes from Borderlands, Final Fantasy and Street Fighter to anime from Naruto and Sailor Moon, the girls get gussied up in some truly exceptional threads.

Thirteen women are currently shooting for My Geek Goddess, but I'm sure that number will soon rise. The models have varying personal styles and looks as well as different ethnic backgrounds, giving the small roster surprising variety. Each model is granted a full, detailed bio on which you can read about their own personal experiences with geekdom.

Costing a paltry $9.95 per month, becoming a My Geek Goddess member shouldn't be a decision you have to hem and haw over for hours. Either you're down with ogling (and, in the bustling forums, chatting with) hot girls in awesomely geeky pop-culture costumes or you're more of a football and brewskis kinda guy.

Cons:
Starting out with a very slow update schedule, My Geek Goddess has sped things up, but not by much. A new gallery now arrives here every Saturday. At that rate, it'll take another full year before My Geek Goddess reaches the 100-gallery mark. Right now there's only 43 galleries online, nothing else.

Although a slideshow is available to help you breeze through each gallery, zips have not been provided. This leaves you with no choice but to save every individual photo you're interested in, a very time consuming process. Only one image size is offered, too, and while 1200px is certainly good enough, it's far from offering truly excellent imagery.

It'd be great to see My Geek Goddess start producing video content. It doesn't have to be especially risque or anything, just the ladies cavorting in costume and character. I don't know about you fellas, but I'd love to see these costumes (and bodies!) in motion.

Conclusion:
My Geek Goddess rocks! The characters, the models, the costumes, the locations… it's all great fun and very sexy stuff, but then you run out of it. Even though updates are now promised to arrive weekly, with only 43 galleries online My Geek Goddess is a very small site and won't be of a more sufficient size (say, 100 galleries) for another year. With no video content to boost the value of a membership, My Geek Goddess won't be hard to resist for those who prefer having all mod cons (HD vids, zipped galleries, bonus content) that this site forgoes. But if it's geek girls you want and half-naked cosplaying ones at that, you won't find many other sites on the level of My Geek Goddess. It's somewhat of a frustrating site, sure, but the pleasures far outweigh the downsides.