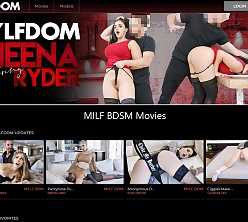 Only five months into existence and MYLFDOM has already slowed its initial weekly update schedule to half that frequency. We can hope this is only a temporary lull before energy is refocused on this promising and surprisingly original site. The premises are just absurd enough to prove consistently entertaining and it’d be shame to see this site disappear early on in its life.

Every now and then the plot and porno-producing machinations behind MYLFDOM’s raunchy and often riotous episodes get in the way of the sex. Cameras miss great opportunities just so they can settle on an unexciting shot of two big-assed women in lingerie at the knees of their cock wielding commander. It seems like an obvious shot choice and it is, and it often breaks the flow of a scene.