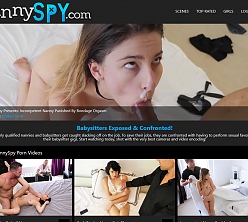 Overview:
Allowing a stranger into your home to watch over your precious brood can be a nightmarish situation for any parent. Even after weeding out any suspicious characters and unreliable references, you’re still worried until they’ve proven you shouldn’t be. The babysitters and nannies of Nanny Spy prove that your concern is well founded, taking the opportunity as they do to sully the blessed homes of their employers by masturbating on sofas, using kitchen aids as sex toys, and generally slutting up the place when they should be standing vigilant. Nanny Spy sees the typically male employers of these freaky teen and twenty-something babysitters come home to a surprise solo slut party. Faced with a firing or a fucking, the girls tend to choose the latter, spreading their young cunts for a hardcore dicking from “daddy” that’s rife with fantastic age-play, dirty talk, and physical punishment. In epic 4K Ultra-HD and High Definition videos, Nanny Spy lays the reality-warping scenarios on pretty thick, but if you dig watching deviant girls gorge on grown men’s cocks while playing up the whole “innocent girl turned deviant whore” schtick, Nanny Spy, which charges $29.95-a-month for access, has something very special for you.

In each Nanny Spy update, members, who can now sign up for a mere $17.95, are treated to both High Definition streaming video and 4K Ultra-HD downloads that throw excellent detail onto your screen. Photo galleries are also provided and give you a chance to slow things down for a closer, longer, pervier look at these decadent young women.

Cons:
Some sites under the Passion HD umbrella update every week, some others every fortnight. Nanny Spy, however, only updates whenever something’s ready to go. At the current production rate, it seems members can expect no more than one new scene each month. The site currently offers a modest 38-scene collection.

Without much smut of its own to peddle, tying Nanny Spy more closely to one other Passion HD site, if not the network itself, would make this two-year-old site a much stronger case for membership. As it is, there’s simply not enough content here to keep you around any longer than your first month.

If you’re not into daddy play and its associated kinks, you wouldn’t likely be here but even devoted daddies may find Nanny Spy a bit ludicrous in its premises and scenarios. Some scenes push quite hard on the “fuck or be fired” angle which also runs the risk of ruining it for viewers not interested in daddy-daughter style punishment.

Conclusion:
It won’t take you long to tear through Nanny Spy’s modest collection, if you’re so inclined. With only 38 scenes online at present and updates arriving no more than once each month, there just isn’t a whole lot to see and do here yet. What is here can be very entertaining, however, the verbal exchanges and solid performances giving it fantastical style that’s still rooted in something resembling reality. The sex can get quite rough but the aggression never becomes worrisome or truly disturbing. This is all good fun, folks, and it’s great looking fun, too! High Definition streams provide members with clear, smooth online viewing while the 4K Ultra-HD downloads give those who want them a chance to really bliss out on ultra-crisp visuals. This content clearly won’t suit those into the more general hardcore of other Passion HD outfits but daddies and other assorted deviants should get a real kick out of the modestly sized but nonetheless potent Nanny Spy.