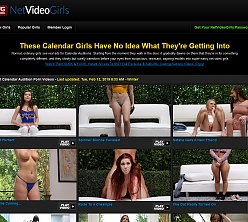 In addition to the epic collection of Net Video Girls itself, all members receive free access to a wealth of bonus sites all dealing with amateurs of one kind or another. Net Girl and Casting Couch HD are both run by the NVG crew and essentially seem like extensions of this already awesome site!

Some may find it difficult to tell your average Net Video Girls update from a Net Girl update from a Casting Couch HD update. Truth is, all three sites are produced by the same crew of guys and share many visual and stylistic similarities. Casting Couch HD is the most distinct, what with a BBC center-frame in most videos and all, and Net Video Girls could stand apart a little more clearly.