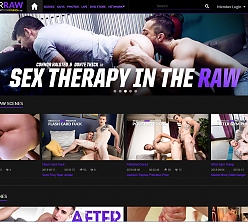 Of all inventions to benefit human sexuality, possibly none has benefitted us as much as the condom. Unfortunately, it’s also kind of a drag to rip out a rubber and strap yourself senseless just as you’re about to (at long last, omigod) penetrate that hunky, hairy hole you’ve been dreaming about all night. Well, at Next Door Raw, viewers enjoy a hardcore all-male extravaganza that’s grown significantly since last Mr. Pink stopped by, adding more and more HD butt-fucking with twice-weekly updates each marked “bareback” - just in case you forgot what forbidden mode of fucking brought you here in the first place.

Overview:
Those who feel the United States has lost its standing in the world, its glowing reputation as the bastion of righteousness in a tumultuous world of inhumanity, tend to look back to the 1950s for the last gasp of their pristine, lily-white American ideal. As it turns out, though, the homogeneous suburban serenity these folks imagine never really existed. Sure, you had nuclear families popping up all over the place, but you also had, you know, “queers.” Next Door Raw exposes the reality of our supposedly straight-laced communities, capturing intense hardcore sex without a single woman in sight. What’s more, this hardcore homo emporium guarantees that no dick wears one of those hideous latex sensation-destroyers breeders need to stop, well, breeding. That’s right, sports fans, Next Door Raw is devoted entirely to bareback sex between daring men, rendered in High Definition videos that pull no punches when it comes to revealing the sordid, once illegal sex lives of our next door neighbors. For $29.95-a-month, members of Next Door Raw enjoy all the barebacking they could possibly desire, as well as access to the renowned Next Door Studios network, a online haven of top-quality gay hardcore if ever there was one. So, John Q. Citizen circa 1955? Anything to confess?

Access to the rest of the Next Door Studios network comes free with any subscription to Next Door Raw and provides you with a huge amount of top-notch all-male smut. With sites devoted to black guys, sex with twinks, solo stroking sessions, hardcore castings and debuts, boys next door fucking each other senseless, and, of all things, sex with actual female women! All active sites now deliver 1080p HD streams and downloads, too!

Cons:
Next Door Raw doesn’t exactly focus on the absence of condoms. Occasionally you’ll get a scene in which the boys discuss the issue and decide, nuts to desensitization, they want to feel every possible sensation as closely as they can. These little talks can be just as thrilling as the actual physical contact - it’d be great to see more.

While it’s fantastic to see Next Door Raw now updating twice every week, there’s a very good reason that schedule came to be. Though the archive now holds 190 scenes, it was once the obvious little brother of the Next Door family. Other Next Door sites have shown this kind of promise before only to taper off of abruptly die. Hopefully that doesn’t happen to this no doubt controversial barebacking bonanza.

Again with the updates…! Other Next Door Studios sites fail to match the twice-weekly updates of Next Door Raw. Some do fine with weekly installments but others fall far short, either adding content so sporadically as to be almost laughable, or not adding new content at all. However, the network is, on the whole, very active.