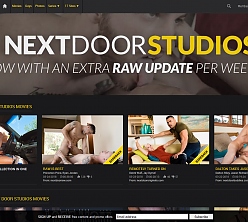 Hey, it’s great to see such foxy young women as Heather Vahn, Britney Amber, Hope Howell, and Gabriela Paltrova opening themselves up to a new onset experience, but the real focus here is on the men. Notable guys seen here gulping down each others cocks include Matty Strong, Mark Long, and Slate Steele, as well as legends Mason Wyler, Cody Cummings, and Tommy D, who all are given their own spotlight sites.

Captured in HD formats and delivered here in streams and downloads at 720p and 1080p resolutions, all recent Next Door Studios content looks very good indeed. Photo galleries offer 1920px shots online and in zipped sets, but the real focus here is the moving footage, not stills. Videos play smoothly online and bring scenes both light-hearted and loaded with dark, deep passion and lust.

Cons:
Some of the Next Door Studios websites have had long periods of inactivity, including my personal favorite (duh), Next Door Hookups. That site has just been revived by two excellent new hetero encounters, which is a great sign. Stroke That Dick, Next Door Casting, and Next Door Twink are all currently non-updating.

A little more variety across the network would be great to see. Next Door Hookups brings something truly fresh and exciting to the industry and it’s clear Next Door Studios is capable of so much more than its occasionally tired gay hardcore episodes. Don’t get me wrong, most of the smut found here is well made and plenty hot, but the sameness can start to render it all a bit bland after a while.

Hey, we try our best here at Mr. Pink’s, but sometimes a deal is so good it can only last a short while. If you’ve any inclination towards joining Next Door Studios, now’s a damn fine time. At just $14.95, one month, your first as a member should provide enough time to A) figure out if the network’s a good fit for your tastes, and B) hoard a few choice cuts for later viewing, and as a reminder of what you’re missing without Next Door access.

Conclusion:
Next Door Studios hasn’t been able to keep every single one of its now-17 network sites fully active, but that’s to be expected from any studio site lasting as long as this one has in such a difficult and undervalued niche. Home to one of the ‘net’s only hetero-porn-for-gay-viewer site in the recently revived Next Door Hookups, Next Door Studios offers much more than most male-focused sites. Sexually, the gay content can be a bit repetitive but there’s enough group action and experimental fucking to keep things interesting. Visually, most sites deliver strong 1080p HD streams and downloads, and rich photo galleries that, though small, offer strong, atmospheric images. The active sites manage to combine forces and bring members a new scene every weekday, ensuring those that do take the plunge, whether it’s familiar territory or an unknown arena, get a daily dose of Next Door’s unique offerings.