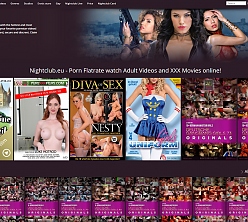 Although content quality is highly dependent on the source from which it came, Nightclub EU provides 1080p HD video streams when possible, reaching 720p or 480p when HD isn’t available. Additional playback options allow you to take Nightclub EU out of your browser and onto your SmartTV, AirPlay, or Chromecast device.

Different membership options ranging from a $12.99 basic package to Nightclub Premium’s two-year $215 option. The archive held here is very solid, though, so you’re definitely looking at great value for money. With more than 350 titles available from nearly 250 studios and each one offering one, two, three, even seven scenes or raunchy romping, Nightclub EU has a solid amount to offer.

Cons:
Nightclub EU isn’t the most attractive site on the ‘net. It often feels cluttered and far too busy to effectively use. Then model roster produces one long, long page of names and faces instead of a paginated, sortable list. Most curiously, select a title then hit ‘Play” on its viewing page and Nightclub EU returns you to its main homepage.

Very little of what’s to be found at Nightclub EU could or should be regarded as exclusive or original. Aside from a collection of 90 amateur and 115 professional titles from Nightclub’s own studios, everything here was sourced from another site or studio or home video release and is therefore not exclusive.

Not only is most of Nightclub EU’s archive available elsewhere, it’s often found in better quality on the studio site from where it came. Streams may hit 1080p but they appear to have been re-encoded for Nightclub specific playback and don’t always present as crisp and clear a view as is possible.

As an online video library, Nightclub EU doesn’t offer its members any form of downloadable content at all. None of the videos can be saved, only streamed, and there’s no rental option that includes a download link. It’s a shame, too, as some of this smut if so hard to find it’ll be worth holding onto.

Conclusion:
For a lot of folks, a streaming-only site will always be a hard sell, but that’s what we’re dealing with here at Nightclub EU. Those willing to give this super-archive a shot will find a wide range of porno concepts and styles available, many titles offered in 1080p HD streams, others in SD. Any archive like this will range in visual quality and sexual appeal from title-to-title and Nightclub EU does exactly that. Variety is the lifeblood of this site, however, and those with wide-ranging appetites will find plenty to feast on. It’s hard to say just how often the collection is updated but the presence of content from 2016 and 2017 is definitely encouraging. Nightclub EU will definitely grab some viewers by the balls and not let go, so if you’re into gagging or pissing or gangbangs or butt-fucking or party-sex or deflowering or public outdoor shenanigans, Nightclub EU caters to you.