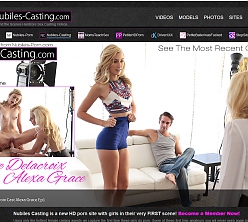 Pros:
Some of these hardcore auditions feature just one girl, sometimes only giving an interview, but most throw both a stiff dick and a dominant bi-friendly girl into the mix. With the new girl submitting to the instruction and direction of the more experienced performer, there's plenty of intense chemistry, obviously real orgasms, and two-on-one action that leaves the guy wondering why he doesn't help out his director friend more often.

On top, with camera in hand, giving direction to the newbies Nubiles Casting sees Mila Jade, Holly Michaels, Maryjane Johnson, Cassidy Klein, and Jessa Rhodes in fine form. As the newbies, Joseline Kelly, Alina Li, Hollie Mack, Aspen Ora, and Molly Jane are among those having their hair held back mid-blowjob by the camerawoman/casting-director/pussy-muncher that's about to dive between her thighs.

Although not yet reaching for the 4K Ultra-HD videos hosted by some other advanced adult sites, Nubiles Casting still looks pretty damn amazing with 1080p High Definition streams and downloads on hand, each looking equally brilliant. File sizes can be large but, trust me, the detail is well worth the download time.

Cons:
Some of the foxy female casting directors don't bring much to their scenes, simply letting the new girl have sex with the guy while she captures it on a roving camera. The most thrilling scenes are those with one majorly dominant girl and one submissive. Odette Delacroix is fantastic at domming, as are Piper Perri and Mila Jade.

In Nubiles Casting's early days, scenes ran about 40 minutes and included many positions and different viewpoints. Some recent scenes ended up running only 25 minutes and include only two or three sexual positions. There's also an titling issue that leaves some scenes named "Ep1" or "Ep2" without ever making the other chapter available. Very strange indeed.

Nubiles Casting is by no means a huge site. At writing it holds only 67 scenes and although they often run over 40 minutes, pickier members might not find all that much to tickle them. Updates are also very slow, arriving just once each month. At this rate, it'll be a while 'til Nubiles Casting has more than 100 scenes.