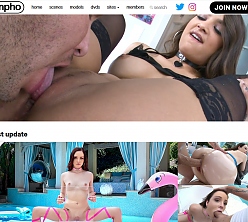 Pros:
The young cast of Nympho certainly make the title an appropriate one. Vina Sky, Katya Rodriguez, Sloan Harper, Liv Wild, Demi Sutra, Honey Gold and Jill Kassidy all spread their thighs for glorious long cock slides that make for excellent viewing. The seriously sizzling performances from Melody Marks, Nia Nacci, and Emma Starlet are unmissable and easily among the best work those stars have yet shot.

Keeping the camera close for full-frame views of the pert asses, perky tits, and sweet faces of his cast, Adriano and his crew bring viewers very strong videos in the director’s signature style. Video streams reach both 720p and 1080p, as do downloads, and while there are no stills galleries to speak of, the videos offer many great tease shots before the action starts.

Cons:
Mike Adriano appears to have slowed down his shooting schedule, at least as a performer. Now sharing the cock stuffing duties with Logan Long and some guy named Alex, Adriano is focusing on his multiple new brands, not just busting nuts himself. The new male performers are good but don’t have the same delivery or chemistry with the girls that Mike does.

Adriano tends to keep his camera close to hip height and rarely delivers full body shots of the incredible foxy women, at least not once the sex has started. Moving the camera back a touch would certainly show off this incredible cast a bit better but, then again, Adriano clearly knows what he’s doing; he’s got the awards to show for it.